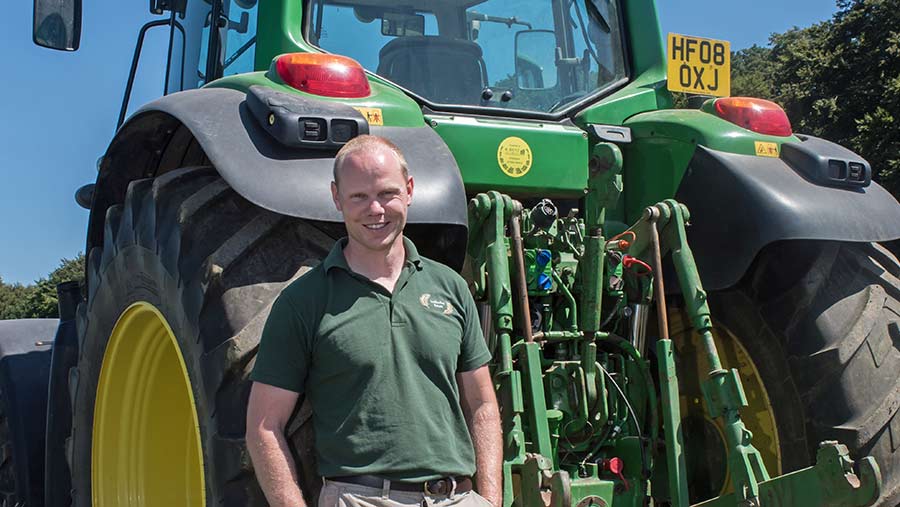 What a difference a year makes. This time last year my children were having snowball fights in the yard and sledging.

Twelve months later and nearly all spring crops were planted by 1 March. A great effort by the team for making the most of the weather window.

We looked at stem counts/sq m and I’m pleased with the average of 600 stems/sq m across the wheats and 1,000 stems/sq m on the craft winter barley.

Nitrogen planning has been key this season with some forward wheat crops so we have to be disciplined and farm the crops in front of us.

Chaotic weather in the first half of March prevented us from going too early, which was probably a blessing in disguise, albeit frustrating.

Plant growth regulator treatments are being planned to manage cereal canopy for crop height and light interception later in the season, and not to promote more tillering, so timing again is key.

Old mildew can be seen in Skyfall wheat and low-level septoria on oldest leaves, on our Siskin wheat crops the T0 spray is imminent.

Mascani oats have had weed control and fungicide and we are about to go back in with robust PGR at growth stage 30-31.

Oilseed rape looks well, however flea beetle larvae are not hard to find, with randomised pockets of stunted plants around.

An 80% dose of tebuconazole + boron will be applied shortly for canopy management and foliar disease control top-up. OSR disease levels have been low and robust varieties helping reduce input costs.

A crystal ball would be useful regarding grain marketing as there is so much speculation and opinion out there.

I have taken a percentage cover on all new crop sales and spread risk as best we can, and I have bought an option for the first time on a tonnage.

We were pleased to host the Niab tag Wessex field day and the attendance was great. The rain poured all morning, but it didn’t detract from the discussion within the group.

We were very grateful for the 75 helpers that joined us from West Tytherley primary school, who visited the farm for science week.

The children helped with worm counts in the soil pit, hedge planting and the lambing shed.