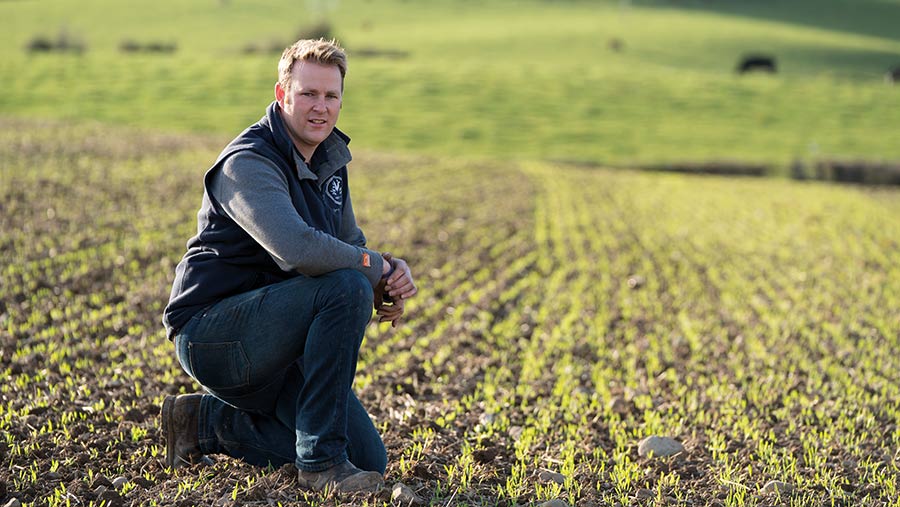 Following a month of dull, damp, cold weather, it’s a relief to have potatoes and maize harvested and all but three acres of wheat drilled up.

Every time I use it, I love my grain drill more! Its versatility and ability to cover ground quickly – averaging 7.9 acres an hour – allowed us to harvest potatoes and maize during the day and sow those fields at night, with dad cultivating just ahead of me.

You’re always a bit nervous until it appears up, hoping you haven’t missed a bit in the dark. A perfect example of this came as I was taking a phone call from “The Boss” and turned the radar off at the headland to stop it beeping… and then forgot to turn it back on.

About two acres later, I was walking back across the field looking for wheat seed on the headland to work out where to restart. That was fun.

Half the wheat is still not through yet and it is evident that germination and establishment are extremely slow. Some seed left over from last autumn has germinated and got away much more quickly than this year’s.

Gleam has romped away, showing great early vigour and uniformity. I feel for the guys in the North West who have had an awful drilling campaign.

It’s extremely disappointing, but no surprise, that the arable and horticulture sectors have been forgotten about in the Defra FMS Tier 1 funding.

I have no issue with the items for the livestock industry, but it’s the fact that parity is not shown across all sectors.

The potato sector has faced major changes in chemistry this year for desiccation and it is surely a major failure that flail toppers were not included in the scheme.

Livestock farmers can buy trailers to transport their produce about but clearly grain and potatoes just appear in the shed at harvest!

On the other hand, a scheme allowing us to accelerate our hedge planting on farm has been especially useful.

Last year, at our own cost we planted 240 metres of hedging. Now, the new funding support means we are planting and double fencing a further 600 metres of new hedging, which will be great for wildlife on the farm.