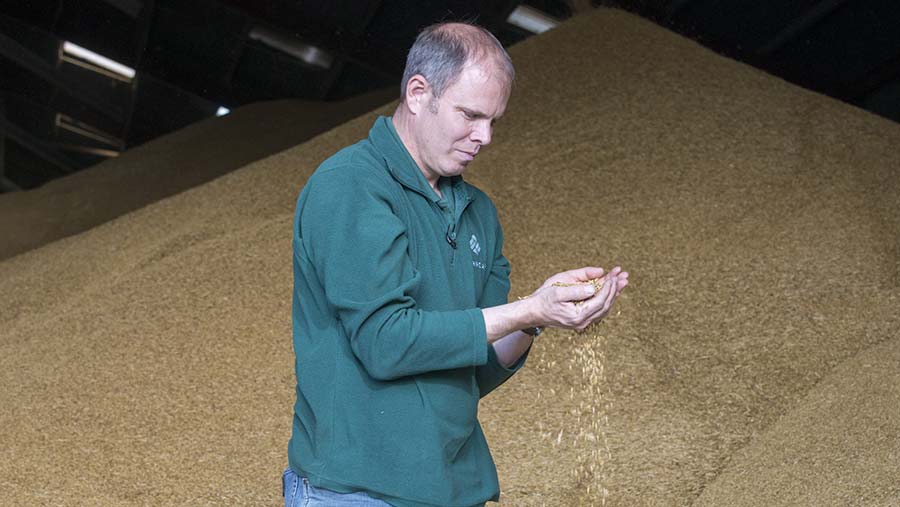 When I went on holiday in early July it looked as if harvest was going to be very early, but a change to cooler and more unsettled conditions slowed things up, with the combine getting into winter barley on 27 July – only a week earlier than last year.

With showers all around, we were extremely lucky to miss most of them and the barley came off at between 14.5 and 19% moisture, meaning an easy time for the grain drier.

I have been pleased with the barley crop, which had not experienced any real weather challenges this year. Some split fields allowed a good comparison of varieties and proved to me that given good growing conditions, the hybrids can outyield two rows.

Overall, there was a 1t/ha advantage from the hybrids, sufficient to cover the hefty seed cost. In terms of quality, all were above 65kg/hl once dried, so no issues there.

As a result of the earlier harvest, I have had time to review seed orders on the basis of this year’s crop and so will drill a majority as hybrid, but continue Tower as well.

My main reason for doing this is that I feel I can increase the two-rows’ seed rate much more cost-effectively if we have any fields to drill later, or that I know are prone to frost heave.

Hybrids will be drilled early in the best conditions to give the greatest opportunity to maximise the tiller number from each seed, but where there is the possibility of complete plant death due to frost heave, I would rather start off with many more plants/sq m.

Unusually, we are having a week to 10-day break in combining until the oilseed rape is ready, by which time I hope the weather has settled down.

In the meantime, cultivations are ongoing for establishing next year’s rape crop, which will be approximately one-third ploughed and the remainder min-tilled.

If conditions are right I have found min-till to be just as effective. It certainly saves some fuel and gives a good control of barley volunteers rather than ploughing down the seed for it to come back up in the following wheat crop.