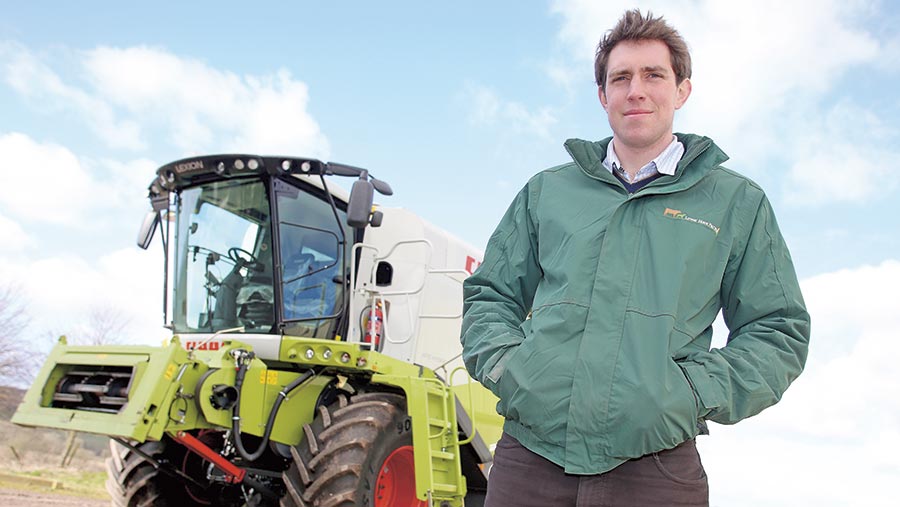 Harvest is due to start any day. I always find the start of harvest the most frustrating – deciding when to start, where to start, trying a bit and finding it’s not quite ready, then trying somewhere else, getting the oilseed rape kit on, then off again; just itching to get going.

Most of the barley and oilseed rape has now been sprayed off, with the exception of some OSR on the lower ground that was desiccated just over a fortnight ago. This is where we plan to start.

The barley is being held back by some volunteer wheat, which is disappointing and something we need to work on for next year.

The oilseed rape this year is such a large, bulky crop that it is going to take time and some good spells of sunshine to become fit enough to combine.

This year pod stick was applied to the crop separately for the first time and seems to have given us a larger window for desiccation, which has been useful for these large crops. It is something I would definitely do again.

We have made a big effort to maximise the output of the combine in our harvest preparations.

In doing so we have fitted our John Deere Greenstar system with Autotrac capabilities to our Claas combine in an effort to keep the header full.

We have also added another set of flotation tyres to one of our grain trailers so we can offload on the move a bit more if conditions allow.

Our new AHDB Herefordshire Monitor Farm was launched at the end of June with a really good meeting that was well attended, with the chance to meet the new joint hosts, “The Chuckle Brothers”.

The core of the agenda for the next three years looks to be focusing on making sure their businesses are resilient past 2020, a topic that will be of real interest.

Finally, I wish everyone a successful and safe harvest.