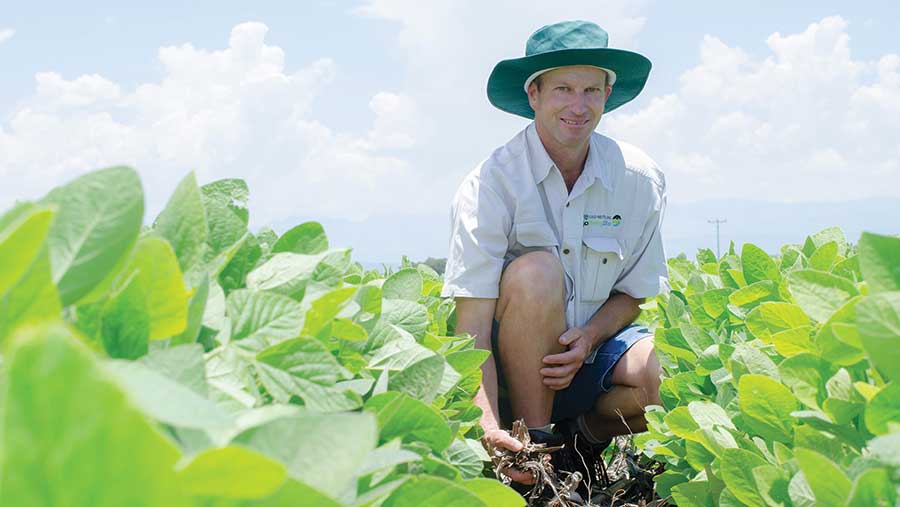 Rainfall in South Africa has been very sporadic. Some of my crops have received more than enough, while others have been living on the edge.

Fortunately, those areas where the rain has been lacking are where I have been practicing no-till and cover cropping the longest, and those crops are looking amazing.

This year, I have certainly busted the myth that cover crops deplete the soil of moisture, so exposing the cash crop to drought. In fact, the opposite is true.

I decided to grow dry beans this season. What we call dry beans are a speckled red kidney bean that is very popular here in South Africa.

Dry beans are very susceptible to waterlogging, as well as to fungal and insect attacks. For these reasons, the higher elevation (1,800m) and sandier soils (12% clay) are perfect for dry beans.

There is just one problem – experts tell me dry beans can’t be no-tilled. That got me thinking about everything that was said to me and other no-tillers when we first started no-tilling maize and soya beans.

They said no-till doesn’t work here because our soil is wrong and our climate is wrong.

It works in South America because the soil and climate can handle it, and it works in the United States because they get government subsidies to help them.

Today, many of those who were against no-till back then are actively promoting it now.

Dry beans are a very quick-growing summer crop planted in December. The designated bean fields, however, became inundated with weeds after the spring rains.

Normally I would kill these weeds, but I decided they were the perfect cover crop.

The predominant weed was khaki. It  is one of those miracle plants that is said to be an insecticide, fungicide and nematicide. Essential oil extracted from this plant is touted to help cuts, burns and cure digestive issues.

At planting time, I killed the “cover crop” and planted through the cover into a dense mass of roots. A month later, the dry beans are looking good and I am confident they will yield really well.

Bruce Shepherd grows 500ha of summer rain fed crops on 3,000ha across two farms in South Africa. They are at an elevation of 1,200m and 1,800m. He also runs 2,600 weaner oxen on pasture, finishing them in a feedlot with maize grown on the farm.