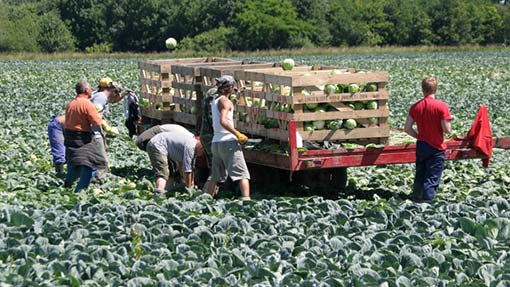 A sustainable food supply hinges on agricultural innovation, but current investments neglect a key area for improving crop yields, according to new research.

The study, published in scientific journal Nature, highlights the need for more research designed by and for farmers as crucial to the chances of meeting the global demand for food.

The authors said advances from existing research were slowing, adding: “yields have plateaued in some of the world’s most important food-producing regions, including east Asia (for rice) and north-west Europe (for wheat).”

In some countries, “yields have declined”, they added.

Read also: What is sustainable agriculture?

The writers stressed that the next wave of innovation “must be at smaller scales”, and “enhancing farmers’ own R&D could reap big rewards for minimal extra cost”.

The authors estimated that the global value of research into small farming businesses at a staggering $4 trillion (£2.36 trillion).

The article highlights examples of good practice in the field, including the Duchy Originals Future Farming Programme, funded by the Prince of Wales’s Charitable Foundation, in turn funded by sales of products through the supermarket chain Waitrose.

The work is being led by two charities, the Soil Association and the Organic Research Centre.

“The aim is to help farmers to sharpen their skills as inno­vators so that they can be more productive with fewer non-renewable inputs – good for the environment and their bottom line,” the writers said.