A growing number of farmers are seeing real benefits in growing cover crops instead of overwintering bare stubbles, especially in northern France where they have been mandatory for 16 years.

An estimated £11m of nitrogen a year was being lost into the sea from one river alone. 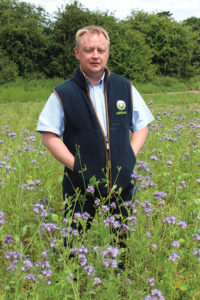 So in 2000, cover crops were required after harvest and before drilling a spring crop. The thinking is that it will capture nitrates mineralised in soil after harvest, he says.

The cost of seed was covered by the government and, initially, there was limited interest by farmers.

But then they started to see other benefits including improved soil health and better workability.

Today, farmers take it seriously and see it as a valuable tool – bringing real fertiliser savings, says Mr DeCarville, who is based in northern France and has worked with French growers for 25 years.

He highlighted one maize grower using winter beans as a cover crop with 8.7t/ha of biomass with 170kg of nitrogen available for the next crop.

It is a similar story this side of the English Channel with some farmers’ interest is limited to complying with CAP greening requirements.

There is much more to gain, adds Ian Gould of Oakbank Game and Conservation agrees.

He urges interested farmers to have a go this autumn, put a small area into cover crops.

Why grow a cover crop?

While cover crops bring benefits to all establishment systems, a key driver in recent years has been to help farmers convert to no-till farming, especially on heavy soil, thereby slashing their establishment costs.

James Woolway, managing director at Opico says they have a particular role for those on more marginal (heavy) soils or marginal areas (wetter regions) of the UK for direct drilling.

“It means more growers can benefit from the substantial cost savings of no-till,” he says.

The main benefit is it improves soil health and builds resilience to traffic, enabling machinery and drills to get on earlier and later in the season.

He highlights the typical costs of the various establishment systems as published by in the John Nix Farm Management Pocketbook (see table).

Comparing ploughing with no-till and with a 10t/ha crop, that’s a £10/t reduction in cost of production, he says.

While worms are easily seen, there are insects, bacteria and fungi which are also important.

Mr DeCarville says there is plenty of research work suggesting where there are low levels of worms, there will be also low levels of the other organisms.

So low worm number should be a concern.

Mr DeCaville believes the biological side of soils has been neglected for the past 50 years. “Cover crops are a good way to increase soil life, by feeding it.”

A soil with a health population of worms can drain much more water and, thereby, cope with intense rain. A fertile soil will have about 1t/ha of worms producing 240t/ha a year of worm casts, which are a mix of organic matter and minerals. 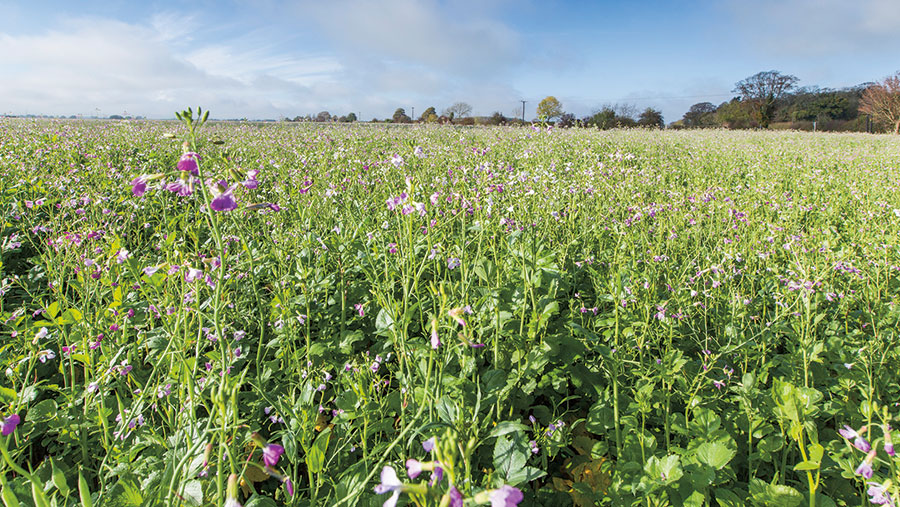 Also roots can go much deeper than subsoilers can. If you go over 4t/axle, compaction is pushed deeper in the soil profile, even with low pressure tyres.

He points to sugar beet harvester weighing 70t being used in autumn.

“You can see compaction up to 60cm down and you can’t cultivate that deep. Cover crops can, however, tackle this.”

“You are more likely to be able to run a tractor on crops at end of October rather than bare soil.”

As with all systems, there are some constraints.

One is the time between crops. “What time is there – is it four to five months or only three?

“You may need to choose a faster growing species if time is short,” says Mr DeCarville.

Also need to ensure there is a break between crops.

If you have brassica then avoid it ending up being a green bridge.

Also consider the ease of destruction – frosts or the expense of chemistry.

There is also the problem of a high carbon:nitrogen ratio.

Beans have a low carbon to nitrogen ratio, which means half of the nitrogen will be available to the next crop.

However, if you go for rye which has a higher carbon content because of its straw, it will use nitrogen when it decays in spring.

Therefore, it’s taking up nitrogen at a time when you are establishing a spring crop.

“Also be aware of the impact of unseasonable weather.”

Frost would have normally taken then out well before spring drilling.

“This made drilling more challenging this spring.”

He adds that these growers that were caught out should not give up.

Very long rooted crops such as diacon radish can cause problems with drains.

Mr Gould highlights one Bedfordshire farmer who saw problems and advises growing rooted varieties, as it still has a valuable role including storing phosphate and sheep grazing.

Finally, costs can spiral if use expensive mixes.

Mr Woolway believes growers should be looking at about £100-120t/ha to establish including seed. Seed should cost about £50-52/ha.

Then all the other benefits are on top.

Once farmers have decided to give it a try, the first step is to determine what is motivating the farmer, says Mr Gould.

“What problem are they trying to solve?

“For some, it is to stabilise soils in areas of high rainfall to cut erosion, while for others it maybe to increase organic matter content, capture nutrients or suppress weeds,” he says.

This is important as this will determine which species to grow, as all have differing roles.

For example, diacon radish is an excellent phosphate scavenger.

Then they need to consider if they have the right equipment, says Mr Gould.

“There is no point growing cover crops and looking to drill into a standing crop if you don’t have an appropriate disc drill.”

Look at your cropping and any contribution to green cover.

Oilseed rape volunteers can be used as part of the mix, but if you are following with spring OSR, you will want to avoid brassicas.

Whatever farmers decide to do, the key thing is to go early.

Mr Gould acknowledges that it is a busy time of year, but to get the most out of them, you need to virtually follow the combine.

“Use the day length to get crops off to a good start, as it is still good at that time of the year. But towards the end of August, it starts to tail off and nights draw in once you get into September.

Three days in August equates to a week in September and two weeks in October, he points out.

“Delaying a fortnight from 15 August to 1 September saw 20kg/ha less nitrogen being captured.

One way to overcome this is to spin seed into standing crops, but he earns that there is a risk. “If it turns wet and grows rapidly, it can hinder harvest.”

Christophe De Carville has 25 years no-till and cover crop experience in France. So what do cover crops do? He sees many benefits which include: