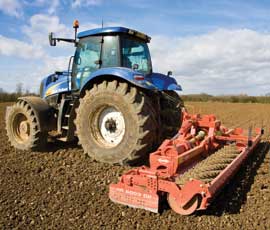 With winter crop plantings in disarray, seed companies are predicting a shortage of spring seed for next year.

Growers have been dogged by rain and prolonged overcast conditions this week as the struggle to establish winter crops continues.

The next few weeks will be crucial in determining spring seed supplies for 2013. If dry weather does not come soon, a surge in demand for spring seed is expected.

Seed merchants have already seen huge interest in spring seed sales as a consequence of the sluggish winter drilling campaign, which has been blighted by wet weather and poor ground conditions, particularly on heavy soils.

“Our spring wheat market is usually very active, but this year it is almost done and dusted and that’s without pushing for sales. The only supplies we have left are from Europe,” said Richard Torr, seed sales manager for Wynnstay Group.

Mr Torr has also seen large quantities of spring oat seed ordered, along with ever increasing enquiries about spring barley.

“There are two scenarios. The first is that the weather holds sufficiently to allow winter wheat drilling to be completed, but we would still expect supplies to remain tight,” he said.

“The second is that there is a lot of land left until the spring, in which case we will be desperately short of spring seed.”

Clarke Willis, chief executive of buying co-op Anglia Farmers, said that this problem has been building for the last couple of years.

“Two droughts have resulted in poor performance of spring crops and, along with good drilling conditions in the last two autumns have seen an increased bias for winter cropping,” he said.

“This has been exacerbated by this year’s poor harvest, producing even less certified seed and the increased demand because of the continuing wet weather.”

But although there is likely to be shortages, growers should not panic. “They should get prepared now rather than wait until the spring,” he warns.

“There is good demand for spring peas, beans and oilseeds, but most varieties are still available. Pulses and oilseeds are not for everybody, so maize could also be an option, particularly for those with stock.”