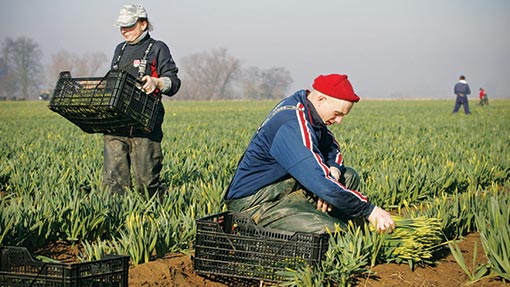 Farmers fear the loss of a migrant workers’ scheme will lead to a labour crisis, extra costs and loss of productivity.

The government has no plans to replace the Seasonal Agricultural Workers’ Scheme (SAWS), which it closed in January, and it wants unemployed UK workers to fill the vacancies.

About 22,000 agricultural workers travelled to the UK from Bulgaria and Romania each year under SAWS, which allowed them to stay in the country for up to six months and work only on farms.

But now work restrictions have been lifted to allow eastern European migrants freedom to move between jobs year round, farmers are worried their workforces will be attracted to jobs outside farming.

Mr Eustice, who has worked on his family’s fruit farm, believes the country should be focusing on getting unemployed British workers on to farms instead of relying on foreign labour.

SAWS has been a very reliable source of seasonal labour. It would be nice to find unemployed Brits to do these jobs, but the work ethic is very different
Andrew Cloquhoun

But the government’s decision to turn its back on recommendations in the Migration Advisory Committee report that it commissioned, which identified the need for a future scheme, has angered the NFU and fruit and vegetable farmers who depended on this vital seasonal labour source.

Worcestershire hop and apple grower Ali Capper, who hires about 60 seasonal workers each year, thinks Mr Eustice is “ill-informed” if he thinks scrapping SAWS will mean fewer eastern European migrants will come to the UK.

“The size of the labour pool at any one time will not change, but more people will be coming and going and I imagine we’ll be dealing with a bigger number of individuals, more regularly,” she says.

“The biggest thing that will happen is we’ll be recruiting more people for the same number of jobs this year.

“Eastern European migrants will come into our industry. They will come over to do our jobs, but they will quickly realise they can leave agriculture and find work in urban areas.”

She says it’s already happening with Polish migrants, who work in the UK for a few months in agriculture, improve their English and then leave the industry for other jobs “under shelter”.

Despite being at the mercy of the weather, she maintains that a job in agriculture is more attractive than working in other sectors.

“Many fruit and vegetable picking companies pay £7.50-£8/hour, which is above the national minimum wage and the best workers can earn up to £500/week, so money “isn’t an issue”, she says.

Mrs Capper understands Mr Eustice’s desire to see more Brits taken off benefits and placed into employment. But she says the benefits system isn’t flexible enough to accommodate this.

“The biggest difficulty people on benefits have is going off benefits for a short time and being able to go back on them,” she explains.

“The government is trying to launch universal credit to put flexibility into this system. It was supposed to be launched at the end of 2013, but it has been delayed until 2017.”

She says the government must address other problems in recruiting Brits for seasonal agriculture jobs, in particular, an “urban/rural disconnect”.

“Where are the populations of unemployed? They are in urban centres and often not on the doorstep of farms,” she adds.

Catherine Chinn, human resources manager at Cobrey Farms, predicts that within a couple of years the loss of SAWS will impact heavily on growers. But by then, the structure of the scheme will be lost and if the government decides to pick it up again it won’t be easy.

“We didn’t want SAWS to go and we did everything we could to try and stop the scheme being scrapped,” she says.

“Now we’re in a situation where the government will not put a similar scheme back in place until there is a shortage in seasonal labour on farms.

“We’ll have a workforce this year and probably in 2015 because there was a limited number of work cards available under the SAWS scheme.

“But in 2016, that’s when we’ll get a workforce drought. People are going to be free to walk away from agriculture and work in warehouses or hospitality.”

She doubts whether there will be enough unemployed UK workers to bridge the gap left by abolishing SAWS, which accounted for around one-third of the UK’s seasonal agricultural workforce.

Last year, Cobrey employed 20 unemployed Brits for seasonal work, but none of them stayed for the whole season and most left after one day.

“Most people who are unemployed in the UK don’t live where the work is available and they don’t want to do this sort of job,” she says.

“The majority don’t want to come and cut asparagus for roughly the minimum wage. They think they’re worth more than that, but it’s still a very important job.”

She insists that the SAWS scheme was the one thing that the UK Border Agency got right, as it allowed the best migrants to come and work in the UK, but only on restricted terms.

Herefordshire soft fruit grower and NFU horticulture and potatoes board vice-chairman Anthony Snell says SAWS was well regulated and had been working well since the 1960s to help farms “bulk up” on seasonal staff shortages.

He accuses the government of scrapping SAWS for short-term political gains to give the perception it is tackling immigration.

Andrew Colquhoun, chairman of the Farming and Rural Issues Group for the South East, says the Home Office’s decision to scrap SAWS was based on “unrelated issues” around immigration.

“It was a dreadful decision to scrap SAWS, which went against the government’s advice of its own independent Migration Advisory Committee,” he adds.

“The workers go home to their country, they don’t become migrants in the UK.

“It would be nice to find unemployed Brits to do these jobs, but the work ethic is very different from what we’ve had from eastern Europeans in the past.”

Mr Colquhoun reckons the abolition of the scheme will push up farmers’ labour costs, which will reduce their competitiveness.

“For 2014, most employers have got people lined up through the agencies like Concordia or HOPS, so they’ll probably get by. But it’s 2015 that everybody’s focusing on,” he says.

“By 2015, it is more likely that Romanians and Bulgarians will be moving off to other areas of the economy, especially employment in urban areas, where they won’t have to wake up at 6am and can earn higher wages.

“Farmers and growers will see their margins cut even further after a couple of years of bad weather, or the supermarkets will return to suppliers outside the UK, which affects the viability of what British farmers are doing.”

David Camp, director of the Association of Labour Providers (ALP), advises farmers to plan ahead to ensure they have enough seasonal workers to cope with any shortfall this season.

“I would expect there to be a great churn this year. Therefore, each grower needs to look at their employment practices, terms and conditions to make their farms somewhere people will want to work,” he says.

Meanwhile, DEFRA has established a cross-government department SAWS transition working group, which is working to address barriers to employment in agriculture that benefits have created.

A Home Office spokeswoman says: “It was always intended that the SAWS would be phased out as the European Economic Area [EEA] labour market expanded. It closed as planned, on 1 January 2014, when the transitional controls on Romania and Bulgaria expired.

“The government does not intend to open any new SAWS for workers from outside the EEA. The horticultural industry should be able to meet its demand for temporary seasonal workers by recruiting within the UK and the rest of the EU.

“We are building an immigration system that is fair to British citizens and legitimate migrants, that is tough on those who abuse the system or flout the law, and that ensures people come to the UK for the right reasons — to work hard and contribute to our economy and society.”

How do farmers tend to recruit seasonal workers?

Some farms use employment agencies, such as HOPS and Concordia, whereas others, especially larger farms, set up their own direct recruitment schemes, to employ UK and EU nationals.

Did SAWS workers stay in Britain and find other employment after their contracts expired?

No. SAWS workers were provided with a working visa, which allowed them to stay for between five weeks and six months only. Workers were required to provide a permanent address for the duration of their stay, and paid tax and national insurance.

Now labour restrictions have been lifted for Romania and Bulgaria migrants, will they no longer want to do seasonal farmwork?

Growers are concerned that, while some Romanians and Bulgarians may return to seasonal work temporarily, they will use it as a stepping stone into other industries where the work is permanent, and seen as more “desirable” than picking crops, such as bar work, catering, hospitality and healthcare. This is based on the experience of the sector when restrictions were lifted on Polish workers.