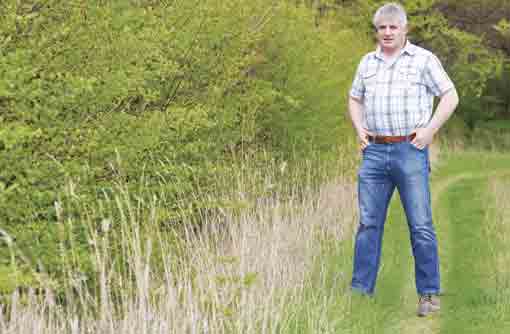 I always look forward to the May Day Bank Holiday weekend. The girls go off to the Badminton Horse Trials and I play in the final game of the rugby season. After the game we have an appropriate celebration.

Sunday was going to be devoted to getting my SFP completed and filed. We also had one of our regular visits from the Hertfordshire Metal Detecting Society who were busy in one of our beet fields searching for the “big find”. One of the younger members unearthed a largish lump of metal and took it to a “senior” member for identification; the latter went white and told him to put it down immediately.

Within a couple of hours we’d had a visit from the Bomb DisposalSquad who carried out a controlled explosion during which time the A10 was temporarily shut.

Once again we are finding ourselves having to make decisions about the future of our Environmental Schemes against a background of uncertainty over budgets and CAP reform.

We have been presented with a number of scenarios for going into HLS including splitting up our ELS so each farm had its own scheme or “stopping” our current ELS and goinginto a new HLS/ELS but then with the ELS on the higher point scoring system which would leave us having to find more points around the farms.

With the uncertainty about whether current schemes will be “rolled forward” through 2014-5 until the next round of Environmental Stewardship starts in 2016, we are veering to following the old adage of “take it while it is there” and going into a new HLS/ELS which would start this autumn.

Of course, we don’t know what CAP reform and its “greening” proposals will bring and how much extra we are going to have to do above the new HLS/ELS. I am reallly appreciative of the help I am receiving from the Cambridgeshire FWAG group in reaching my decision about the way forward.