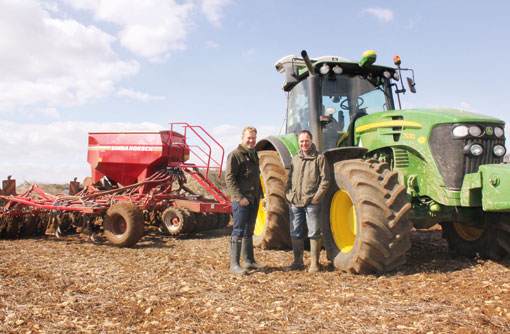 With many growers planning how to get their rotations back on track this autumn, now is a good time to consider simplifying rotations to minimise risk, ensuring their businesses are better able to withstand future extreme growing seasons.

The decision to simplify the arable rotation on one farm in the Cotswolds was justified this spring, after one-quarter of the winter oilseed rape area had to be abandoned and ploughed back in.

Cotswold arable farmer Adam Henson, who is better known for being a TV presenter on BBC’s Countryfile, made the strategic decision with the aim of reducing the risk in less than ideal cropping years, such as 2012.

With his business partner, Duncan Andrews, he manages a total of 1,200ha of arable land, including 450ha of their own land at Bemborough Farm. The farm is on thin Cotswold Brash, with land extending to an elevation of 300m.

As for so many UK farmers, the past 12 months have presented additional challenges to the farm’s arable enterprise, predominantly as a result of unpredictable weather patterns and an extended winter. The unfavourable weather has resulted in 25% of the farm’s winter oilseed rape failing to establish to an acceptable level and having to be replaced with spring-sown rape.

While this has had an impact on profit margins through additional cultivation and seeding costs, the position isn’t as disastrous as it could have been following a conscious decision to simplify the farm’s cropping strategy.

The rotation at Bemborough had previously included peas, beans and linseed, but these crops were dropped, being less suited to the farm’s soil type, and cold, windy location, which makes the farm susceptible to an early onset of extended wintry conditions.

More recently, the key driver for the farm’s arable policy has been to minimise uncertainty and to mitigate yield threats by moving away from crops that are less likely to achieve their yield potential. Instead, the rotation now consists of a core of crops that the pair have a better chance of getting right year after year.

“As tenant farmers, we are averse to taking the risk of growing crops that won’t deliver safe, reliable yields,” says Mr Henson. “We’ve consciously taken the decision to concentrate on a core of crops that we know we can grow successfully, climatic conditions permitting.”

The simplified rotation at Bemborough now follows a pattern of wheat followed by winter or spring sown barley and winter oilseed rape. “It’s a rotation that allows us to safely make the best use of our thin soils,” he continues.

Wheat varieties are predominantly Group 1 milling, with the premiums helping to compensate for the lower yields being limited by the farm’s shallow soils. All barley is grown for malting and the oilseed rape varieties are mainly hybrids to optimise autumn and spring vigour.

Despite the basic nature of the rotation, the business has added extra value by developing its own brand of beer; “Adam Henson’s Rare Breed”, which is brewed by the Butcombe Brewery using Maris Otter malting barley grown at ­Bemborough.

In addition to its own land, the farming partnership manages a 240ha block of varying soil types ranging from sand and gravel to heavy Warwickshire clay. This land had previously been sown on a two-year rotation of wheat, rape with the main threat to productivity levels coming in the form of herbicide- resistant blackgrass.

Adam Henson and Duncan Andrews’ strategy of adopting a lower risk rotation, adding value to barley in an “own brand” product and taking advantage of the local market for horse fodder is a rational way of managing risk out of their business,” says Lloyds TSB’s agriculture policy director, Alick Jones. “Last year’s challenging weather, coupled with this year’s extended wintry conditions, has created additional cashflow burdens for many farm businesses.

“While it is impossible to completely mitigate against the effects of severe or unpredictable weather patterns, it is sensible to consider alternative cropping options appropriate for the farm business so that risks can be managed through a confident and calculated approach,” he says.

“Blackgrass and other diseases are becoming more prevalent due to the tight rotation, and are compromising wheat and oilseed rape yields,” Mr Andrews explains. “As with the cropping strategy at Bemborough, we’ve had to re-evaluate the land’s rotation to overcome a specific set of challenges.”

To improve blackgrass control, spring beans have been introduced as a second break crop, with the worst-infected land put down to a three-year grass ley with hay and haylage sold as a cash crop.

“We’re lucky in terms of our location,” Mr Henson adds. “We haven’t been able to completely curtail the spread of blackgrass using chemicals, so have had to use break crops and husbandry to control the problem. The Cotswolds are heavily populated by racehorse yards, putting a ready-made market for the hay and haylage right on our doorstep.

“It’s a double-win situation, which allows us to sell the hay and haylage relatively easily, while allowing us to treat the blackgrass areas with glyphosate, prior to sowing with spring beans. It also solves the headache of trying to drill winter oilseed rape into heavy clay land during the busy autumn drilling window.”