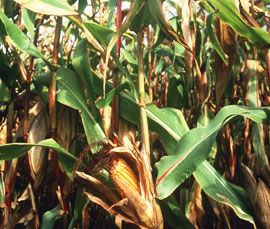 Campaigners who have threatened to destroy the GM wheat trial at Rothamsted Research have refused to back down on their hardline stance.

Activists from the protest group Take the Flour Back are threatening “mass action”, including the destruction of the trial – unless it is halted – when they meet at the trial site in Harpenden, Hertfordshire for a planned protest on Sunday 27 May.

For the first time, a television debate, broadcast live on BBC2 Newsnight on Thursday (17 May), gave farming leaders for and against the trial the opportunity to put forward their cases.

During the live debate, which included some heated exchanges of opinions, Dorset farmer Jyoti Fernandes, who was representing Take the Flour Back, was repeatedly asked whether activists would carry out their threats to trash the crop.

But she refused to give scientists from Rothamsted any assurances that their experimental trial of Cadenza wheat, which has been genetically engineered to repel aphids, would not be pulled up.

Ms Fernanades, who said she had directly seen the negative consequences of GM crops on the environment on her family farm in Iowa, said she would “stop the trial from going ahead”.

Presenter Emily Maitlis asked whether that meant she would stop the experiment and uproot the plants.

“I would like to decide on the day whether or not that’s a valid action,” she replied.

Ms Fernandes said anti-GM campaigners had been protesting for over a decade that government money should not be pumped into GM technology and there were other solutions.

“Nobody’s listening, so we need to take direct action to illustrate what we need to do,” she added.
John Pickett, lead researcher on the trial, accused Take the Flour Back of “not wanting to go through” with a public debate offered by scientists from Rothamsted this Tuesday (22 May).

“We think that the debate should proceed you attempting to destroy the experiment, if that’s what you’re going to do,” said Prof Pickett.

Ms Fernandes replied: “What we would like to do is take part in a more thorough debate in the Guardian newspaper.”

However, she stopped short of ruling out any direct action. “I’m not saying it either direction,” she said.

Prof Pickett said Rothamsted had been given a mandate to carry out the work by receiving a research grant from the BBSRC.

“It’s top science. It’s in the direction of producing food in a more sustainable way,” he said.

“We are using GM only experimentally at the moment. It’s not going into the food chain. It’s not part of a commercial development.

“By sustainability, I mean that if you can deliver crop protection through the seed. If you can have in the plant it’s own way of dealing with pests, then you don’t need to drive a tractor over the crop with a spray on it.”

Prof Pickett said a lot of work had been done in the laboratory and the experiment was needed in the field to see “how it stands up to the rigours of outside ecology”.

Lawrence Woodward, of lobby group Citizens Concerned About GM, was asked whether the trial was “a green version of GM, a decade on”.

“No. Not at all,” he replied. “Our concerns about this trial are: ‘First of all, we don’t believe it’s necessary.

“Secondly, we don’t believe that the process of vetting and licensing the trial has been adequate.”

Thirdly, he said a three-year £1m trial in 2005 by Rothamsted and other research groups, looking at ecological interactions, dealing with aphids and farming systems, had not been taken into account.

Mr Woodward said the trial was “unnecessary” because it was on a crop (spring wheat) that did not suffer from aphid problems.

He added: “GM research really needs to be done in controlled environments. When you take it out in the field it creates bigger risks and those need to be assessed properly.”

Despite the trial taking place in open air, Rothamsted insists it is in a “controlled environment” and the possibility of cross-pollination is “very low”.

Tracey Brown, director of the pro-GM group Sense About Science, said: “If we cut off this research, then we are never going to find the answers.”

She added: “We have got to stop asking people whether they are pro- or anti-GM. GM opens up a very exciting and interesting area of research that may provide answers to some of the most pressing questions.”

Your reaction online to the Newsnight debate

I find genetic mutilation, whether packaged as “Saving Africa”, ensuring “Food Security” or “Sustainable Agriculture” very troubling. I hope we can steer our public agricultural research to assist and empower struggling farmers, tenants and others to improve our national environment and ethics of food production

There are sound political and economic reasons to resist the GM Food agenda, and we must not forget that science, is social, as is its funding. The corporate scientific interests behind the lobby group (non) Sense about Science is fascinating.

GM has a BIG problem that seems to have been “forgotten” in the rush to make money.
Plants breed by using pollen, Any of the crops we grow will and do breed with the natural plants around us.
There is a huge danger that any DNA will be passed on to grasses and produce super weeds and/or have knock on effects for wildlife and of course humans.

Given the fact GM has produced a plague of super weeds in America who exactly is trying to force the issue of GM in the UK?

I also cannot understand why good money is being spent on wheat variety which attracts less aphids – it is resistance to disease and the ability to manufacture nitrogen in the roots aka Beans & Peas.
It only takes 1 aphid to infect a plant so reducing aphids really wont do much and the control is cheap.

If it’s not for UK farmers who are they planning to sell it to? Behind closed doors, unlike this tester crop – at least we can see it. Maurice Moloney founded a commercial biotech firm invested in by major agrochemical companies and patented a gene later sold to Monsanto for their roundup ready GM canola which dominates Canadian agriculture and has ruined Canadian organic growers through cross pollination.

Naturally Rothamsted will be exploring GM science rather than research into alternatives which promote biodiversity or support more sustainable farming models in UK farming and beyond. I think they massively underestimated British farmers and the public’s distrust of GMOs and the motives of agrochemical corporations when they blithely popped this out into the field. See you on the 27th.

Rothamsted scientists to answer your questions

Marmite debate gets us nowhere on GMs

Have your say on our GM trial forum