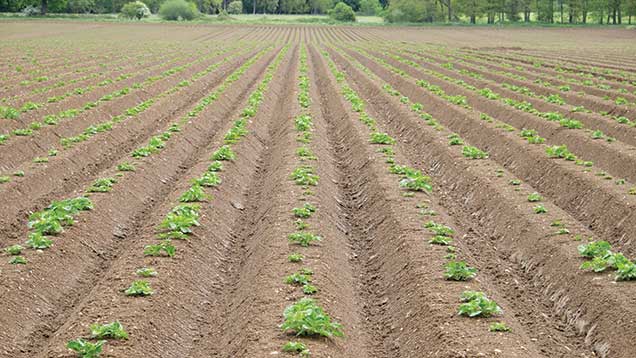 Potato growers are being urged to protect emerging crops against late blight despite the prevailing cool conditions keeping inoculum levels in check.

Late blight – caused by the pathogen Phytopthora infestans – favours warm and wet conditions, with risk typically been indicated by a Smith Period.

A Smith Period is defined as two consecutive days where the minimum temperature is 10C or above and on each day at least 11 hours when relative humidity is greater than 90%.

However, the blight populations in the UK are now dominated by two blight strains – pink 6_A1 and blue 13_A2 – which are more aggressive and have the ability to infect plants at lower temperatures, earlier in the season.

Agrochemical giant Syngenta has reflected this shift by reducing temperature to two consecutive days at 8C for its Blightcast decision support tool criteria.

In Kent, Zantra agronomist Kevin Knight says the first blight symptoms were found on foliage in a potato dump last week despite the cool weather and fires a strong warning shot.

“I have not seen any in the field yet, but it is vital to stay in a protectant situation, so my growers will be starting fungicide programmes this week.

“After that, we will be keeping sprays at seven-day intervals, unless the pressure increases, then the gap will be tightened,” he says.

Prime Agriculture’s Colin Smith advises in west Norfolk and Cambridgeshire and has not seen late blight in crops either, but will also be applying a protectant spray imminently.

“Some crops have a good rosette, and with the more aggressive strains and potential for seed- or soil-borne inoculum, you cannot be sure what pressure there is in the field.

“Do not take any risks; you have to keep crops protected against the disease,” says Mr Smith.

He is opting for an early application of the cymoxanil and mancozeb-based Curzate, with the cymoxanil element giving some “kick-back” activity on any seed-borne infection.

Further north in south Lincolnshire, John Keer of Richard Austin Agriculture says the low-pressure start to the season is allowing him to opt for a cheaper first spray, preferring a fluazinam-based product as soon as crops emerge.

“If it turns warmer and wetter and there is rapid growth between sprays, that is the time to switch to stronger products with some curative activity, such as Infinito,” adds Mr Keer.

Another potential worry is early blight – caused by the alternaria pathogen – and growers will need to keep a lookout for the disease as crops develop, particularly in susceptible varieties such as Markies.

The disease typically comes into the crop after dry weather, followed by warm and wet days and stressed crops are most at risk.

Mr Smith says the best fungicide is a healthy crop, so good nitrogen management is crucial and using multisite active mancozeb through the programme will help protect against the disease.

“Choosing a late blight product such as Amphore that has activity on alternaria mid-season is advisable, with another two sprays later,” says Mr Smith.

He adds that where risk is particularly high, alternaria-specific products such as Narita or Signum on an Extension of Authorisation for Minor Use (EAMU) are available to boost activity.