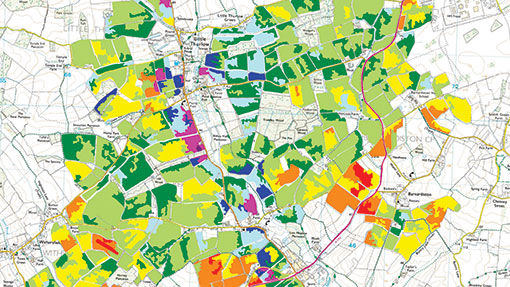 Precision farming is the current buzz word in agriculture but how does it really shape up?

We asked past Farmers Weekly Awards winners and runners up for their views on the technology they are using on their farms.

More on this: Drones to have a bigger role in mapping arable crops

Andrew Ramply: Runner up Arable Farmer of the Year 2011

Two years ago, Mr Ramply decided to update his Househam AR 3000 sprayer with new technology after seeing the rising costs of his sprays.

Mr Ramply is making pesticide savings of £2,000 a year that will help pay off the cost of the system in about three years.

Mr Ramply hopes to enhance further the use of agrichemicals on his 1,295ha arable farm at in St Neots, Cambridgeshire by mapping blackgrass populations across his cereal and oilseed rape crops.

The SOYLseed service used by Mr McGregor gives a series of maps, which he is able to calculate variable seed rates for £15/ha rates.

The SOYLseed service works by taking a survey of the soils physical properties and using these to create different soil zones. These are then used to calculate seed rates.
Advantages:

Mr McGregor has seen more even plant stands across each of his fields, as he is able to apply seed and input to match the variability of his soils.

Mr McGregor hopes to roll variable inputs out over a larger area of the farm in a bid to reach what he says could be a 9% yield advantage.

David Miller: Runner up Arable Farmer of the Year 2010

The N-Sensor has been on hire since 2011 costing £7,000 a year, but Mr Miller has plans to buy the equipment outright which including the money spent on rental would cost in the region of £22,000.

The tractor-mounted tool measures a crop’s nitrogen requirement as it passes through a field allowing vary fertiliser rates accordingly.

Mr Miller is seeing much less lodging as a result of putting less nitrogen on those areas that are at increased risk. Milling wheat is also seeing big benefits from more nitrogen, which takes the protein levels up.

Mr Miller is in the first year of using a Stripcat drill to establish his oilseed rape in the hope of getting a more consistent establishment percentage and reducing seed rates.

For more on this: See our precision farming and technology page

Tony Bambridge: Runner up Arable Farmer of the Year 2012

GPS technology works using satellite signals to guide the tractor and its equipment when in the field reducing overlap and improving accuracy.

GPS delivers significant savings on crop inputs, removes staff fatigue as well as saving on fuel and wearing parts. Mr Bambridge estimates savings of up to 10% on cultivations.

The future:
Mr Bambridge has had mixed success with precision farming techniques having previously used variable rate P & K applications. However having root vegetables in the rotation meant indices were fairly good and little benefit was seen according to Mr Bambridge.