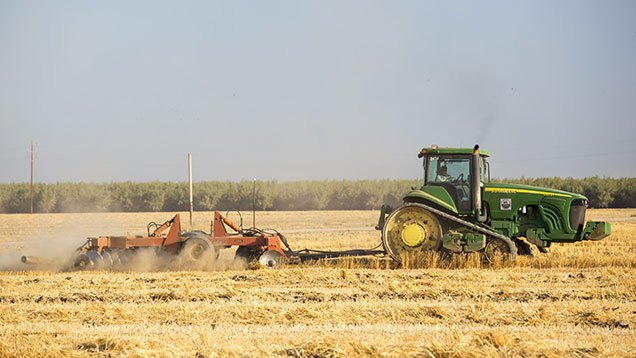 The Central Valley is known as the breadbasket of America and covers a vast area, equivalent to half the size of England, writes Pat Thornton who joined Marr Arable Group’s grower trip to California.

It is really two valleys – the San Joaquin to the south and Sacramento to the north.

It is about 450 miles long and 60 miles at its widest point and is the world’s largest patch of Class 1 soil (reportedly one mile deep in places). The 25C or so temperature swing from day to night is an ideal growing range for plants, with the sun shining nearly 300 days/year.

It produces more than 400 different crops and half of the fruit and vegetables in the US. The eastern half of the valley (and the western, to some extent) uses ice melt from the Sierra Nevada as its water source, which means, in theory, it doesn’t have the drought and flood problems of the Midwest of the US.

The winters are cool, which offers a different growing season for plants that cannot take the summer heat. There’s no snow – it’s one giant “outdoor greenhouse”.

Matt Cooper from Lucero Farms, close to Sacramento (but originally from North Lincolnshire, UK) was pleased to see the rain during our visit. But, with more than 90% of the state in “severe to exceptional drought,” it would have little or no impact.

Records have been kept since the 1840s and last year was the driest yet with a Nasa scientist predicting there is only one year’s water left.

Lucero Farms forms part of the Morning Star Packing Company and was founded in 1970 by Chris Rufer, a one truck owner-operator who was hauling tomatoes to other canneries.

Today, still owned by the same man, Morning Star accounts for more than 25% of the California processing tomato production, supplying 40% of the US’s ingredient tomato paste and diced-tomato markets including to customers such as Pizza Hut and Domino’s Pizza.

It was here that the impact of the drought was put into perspective. Many farmers, including Matt, did not get any irrigation water last year from a federal system of canals and reservoirs, forcing them to rely on diminishing groundwater supplies.

The immediate cause of the drought is a 2,000-mile long area of high pressure which has been sitting off the US West Coast for more than a year and has deflected storms around the Golden State.

However, adding to this, the US Supreme Court has recently refused to consider appeals by Central Valley farmers and California water districts that want to pump more water from the Sacramento river delta, as it serves as the only home of a tiny, threatened fish.

The decision lets stand a 2008 US Fish and Wildlife Service plan to safeguard the 3in-long Delta smelt, a species listed as threatened in 1993 under the federal Endangered Species Act.

The plan restricts the amount of water that can be pumped out of the Sacramento-San Joaquin Delta and sent south to Central Valley farmers and water districts so threatening the production capacity of the region.

The tour was planned around the World Ag Expo and the event’s seminars reinforced the scale of the issue.

Ryan Jacobsen, executive director of the Fresno County Farm Bureau, said up to 100,000ha may remain fallow there this year.

He said: “This drought is in the $0.5bn [£0.34bn] to $2bn [£1.34bn] range. Farmers are having to get rid of cattle because there is no grass to feed them. It’s catastrophic and there will be repercussions at the supermarket.”

Despite this there was still a long-term optimism surrounding the exhibitors and many of the larger growers we met further along the tour.

Paramount Citrus was a good example with its brand of Halos – easy peel Mandarins.

The majority of the 5,668ha of Halos harvested are processed in the world’s largest citrus packing house in Delano.

With a history of growth and innovation the company has developed into the largest fresh citrus grower in the western US. Its own research work is bringing citrus crops to harvest a year earlier reducing water demands, and its scale allowing it to move water across its 36,360ha operation.

Our final visits were to Bolthouse and Grimmway farms. They supply an estimated 85% of the carrots eaten by Americans, processing up to 5,000t a day.

At both operations, carrots travel around their pack houses on conveyors and flumes of recycled water en route to become julienne, coins, sticks, or baby carrots. Other carrots are frozen or made into concentrate, salad dressings and beverages.

Fibre is separated for use in the manufacture of tomato sauce and hot dogs. Whatever’s left becomes cattle feed.

The scale of these operations was put in to context when Bolthouse estimated that their tractor fleet ran to 600 main units.

In conclusion, the American can-do attitude shone through our tour and it is this that has got these farmers where they are today. It’s going to take more of the same to meet the future challenge of drought and increasing production.

But there seems to be no doubt in their mind they will do it.

Pat Thornton went to California with the Marr Arable Group, comprising farmers from Yorkshire and Lincolnshire.