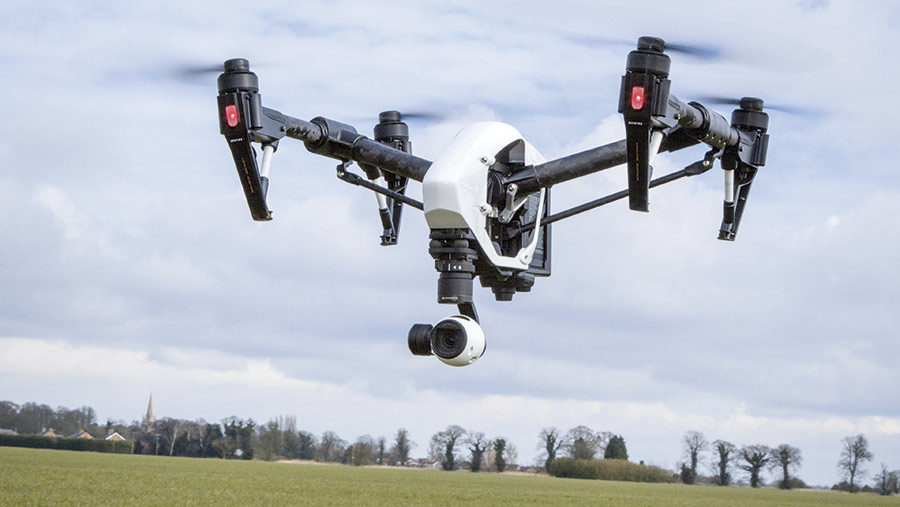 Drones may still be regarded as something of a technology gimmick by some, but their use in agriculture is increasing rapidly and they promise to play a big part in future crop management.

Drone and sensor technology is advancing continuously and with costs falling too, more farmers are seeing such systems as a worthwhile investment.

Indeed, the next five to 10 years could herald a step-change for crop agronomy and the whole agrochemical supply chain if the prospect of fully autonomous drones scouting fields for signs of disease and treating crops as necessary becomes commercial reality.

See also: How to get started with a drone to monitor crops

Richard Green from Harper Adams University, home to the National Centre for Precision Farming, says a number of projects are planned or already under way to develop advanced applications for drones in agriculture. So it is a case of when, not if, this advanced capability finds its way onto UK farms.

Using drones to carry cameras and/or sensors capable of mapping fields has been possible for several years now, but the types of sensors available to farmers is improving all the time.

Many entry-level drones are fitted with standard optical RGB cameras that generate an image by detecting red, green and blue light and can be used for basic aerial crop assessments and imaging.

But advanced multi- and hyperspectral cameras are increasingly available and offer a host of applications beyond basic aerial imagery.

Multispectral cameras measure visible RGB light plus three to four other wavelengths, mostly infrared, that can be used to detect a range of changes within the crop, such as water stress or the presence of latent disease.

Hyperspectral cameras take this one further and can measure anything up to 128 different frequencies, from visible light through to infrared and ultraviolet.

Dr Green says this level of imaging detail has enormous potential for agriculture, as one image could be used to measure any number of factors, from soil type and water status to specific disease or pest incidence in crops, as each variable produces its own spectral image.

Rothamsted Research, for example, is already using hyper-spectral cameras on its fixed “Field Scanalyzer” platform to measure the performance and health of crops.

But with hyperspectral cameras costing about £50,000, it is likely to be five to 10 years before they are an affordable option for mainstream farmers beyond large farming companies.

Dr Green says the next two to three years are more likely to see a steady increase in multispectral cameras capable of detecting known frequency patterns for specific pests or diseases, such as septoria.

Velcourt, working with BASF and Hummingbird Drones, is one of those examining the feasibility of detecting foliar disease in wheat using remote sensing.

Potentially one of the most important opportunities for drone use within agriculture is the fully autonomous drone.

Current regulations effectively prohibit autonomous drone use by not allowing for flights beyond the line of sight of the pilot controlling the drone.

Although there is scope within existing regulations for special exemptions to be made (mostly for research purposes), commercial systems must overcome stringent safety tests and currently no fully autonomous drones are approved for flight in the UK.

In the near future, there may be scope for autonomous drones to be allowed in agricultural situations if the manufacturer can prove to the Civil Aviation Authority (CAA) that the system has all the necessary safety features in place.

Essentially this means drones need “situational awareness”, enabling them to follow or plan a route, sense, avoid and communicate with other air users, and detect and avoid collisions without operator interference.

Development of small, lightweight radar – often adapted from military systems – is key to the flight safety of autonomous drones, says Dr Green, as they scan airspace around the drone to detect obstacles or potential hazards and link into anti-avoidance systems.

Harper Adams is working with a commercial company to develop a fully autonomous drone within two years and international companies such as Flirtley are already trialling drone delivery services in New Zealand, with further tests planned in the US.

Drone manufacturer DJI also has an octocopter sprayer drone (the DJI Agras MG-1) that uses microwave radar to scan the ground below to maintain a constant height above crops.

Aerial spraying is not allowed in EU member states, but the legislation governing pesticide use (Directive 2009/128/EC) does allow derogations where certain conditions are met, namely:

Dr Green believes drone spraying could, therefore, be used for targeted patch-spraying of small areas where there is a clear benefit compared with a blanket field treatment.

There may also be opportunities to use drones on remote, hard-to-access sites (for example, spraying bracken on hillsides) or where waterlogged soils prevent equipment from travelling on fields, he says.

However, before any pesticide can be applied with a drone it must first be approved for aerial drone spraying by both the manufacturer and the Chemicals Regulation Directorate (CRD).

Very few products are currently approved, but Dr Green says work is under way with pesticide manufacturers, regulators and researchers to address this.

A test rig is being built at Harper Adams to evaluate drone-based spraying of certain products and examine factors such as spray quality, coverage, drift and efficacy.

Training provider City and Guilds is also looking at whether the existing PA7 aerial spraying qualification can be made more relevant to drone operators.

It is being modified to include drone use and both City and Guilds and Lantra are creating new drone-specific operator training courses.

Basis also has a voluntary professional register for UAS operators within the agricultural industry.

Other developments to watch

A glimpse into the future of digital agronomy