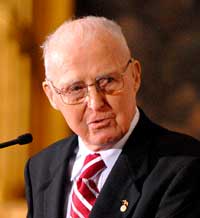 The man known as the father of the Green Revolution in agriculture, Norman Borlaug, has died at the age of 95.

Professor Borlaug studied at the University of Minnesota in the US and went on to work for DuPont and the Rockefeller Foundation.

In the early 1960s he realised that short-stem crop varieties diverted more energy to growing larger heads of grain.

In 1963 he set up a centre to train scientists who helped develop high-yield, disease-resistant, dwarf wheat.

The resulting varieties boosted harvests where famine was widespread and the Green Revolution, as it became known, helped world food production more than double between 1960 and 1990.

It is believed that the Green Revolution helped avert a worldwide famine in the late 20th century.

The Nobel Institute said he had helped save hundreds of millions of lives and Prof Borlaug was awarded the Nobel Peace Prize in 1970 for agricultural innovation and the development of high-yield crops.

He was awarded the highest US civilian award, the Congressional Gold Medal, in 2007.

Prof Borlaug continued his work into his 90s. He died on Saturday 12 September at home in Dallas.