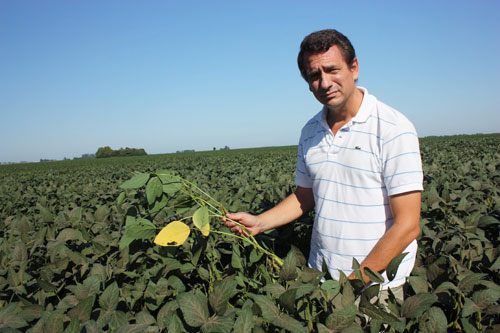 I have just finished planting 567ha of rented land in Bigand (Santa Fe Province), 181ha of maize and the rest soya. Next month I will start drilling 1,000ha of rented land 500km away in Bandera (Santiago del Estero Province), half sorghum and half soya.

In Argentina, the soya bean area is estimated to be 18.8m hectares this season, similar to last year. Based on historical average yields (2.63t/ha), this would mean a projected harvest of 49.5m tonnes. Planting has progressed well in good conditions and there is about 30% of the area still to sow.

The national position is relatively good at present. In the case of wheat, an estimated 12.4m tonnes is expected from the current crop which is due to be harvested shortly (barley cutting has already started). And despite the drought problems with early-drilled maize, the welcome rains in October have led to good growth.

But there are four key concerns. First, there is the global price volatility due to the international financial crisis. Second, the retention tax on soya exports (keeping the soya market up to 35% below Chicago prices) is being felt again as world prices fall and this reduction in revenue is difficult to cope with.

There is also the grain price distortion caused by the government limiting export licenses. The result is that prices have fallen by another US$30/t (£19), so we as farmers now only receive US$120/t (£76/t) on wheat and maize in the humid Pampa. This takes out all the profit from these two crops. Finally, there is La Niña and it is now quite dry in the humid Pampas and I am worried about the impact on crops.

Faced with all these factors beyond our control, we have to make the most of what we can manage such as variety, conserving moisture, drilling date and weed control. In fact, we can still influence a lot.