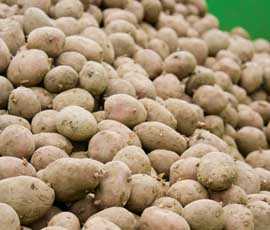 The government has proposed dramatic increases in costs for its plant health services.

The revised costs, proposed in a consultation by the Food and Environment Research Agency, would increase fees by more than 400% for some services.

For example, FERA is proposing a 458% increase in Import Inspection Service costs for plant health checks. A mandatory check of a 25 metric tonne consignment of potatoes would increase from £54.26 to £251.31.

In addition, a 268% increase in import inspections for potatoes imported from Egypt has been suggested. Tests for brown rot would increase from £37.50 to £138.11.

FERA, an executive agency of DEFRA, launched the consultation on Tuesday (11 October) in a bid to move to full cost recovery for the statutory services and remove the burden from the taxpayer.

Five statutory services are covered in the consultation, including plant health, potato and potato seed regulations.

The recommended option is for a phased increase in fees over three years, achieving full cost recovery by 2014/15.

The eight-week consultation will discuss proposals with stakeholders, such as the NFU and Potato Council, to raise charges for services in England and Wales.

Any increase in fees could affect growers who use the services directly, such as the seed potato certification service.

But there could be an indirect impact on growers, such as increasing fees on imported seed potatoes. However, it remains to be seen whether businesses or agencies will absorb costs or pass them on.

Mark Prentice, Potato Council head of seed and export, warned that a proposal to raise costs of the seed potato certification scheme from £100/ha to £200/ha would disadvantage seed potato growers in England.

“The Scottish scheme is working on a full cost recovery basis currently charged at £150/ha.

“We need to share information and best practice with the Scottish system to look at how the current service (in England) can be provided for less without reducing the services.”

NFU crops and seeds advisor Ruth Digby said there was a “reasonable expectation” that service costs would rise, but she urged FERA to “make sure that costs did not rise disproportionately”.

“There are some big concerns within the industry – not just the NFU, but in seed companies and in the potato industry – that the costs are going up but FERA is not doing anything to control these costs at the same time.”

Tony Harrington, director of policy and regulation at FERA, said: “This review is looking at charging schemes which, in some cases have not been revised for 10 years.

“At the moment these schemes are provided to industry at a shortfall of up to 80%, which is effectively a subsidy to the industry and a financial cost to the taxpayer.”