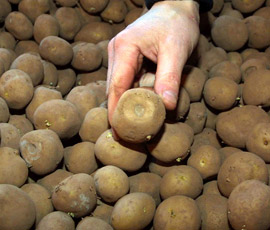 A government research agency is stepping up its fight against ring rot in potatoes, in response to a heightened risk of the disease being imported.

In a bid to stay one step ahead of the quarantine disease potato ring rot, the Food and Environment Research Agency (FERA) is using the latest molecular DNA testing methods to speed up detection in tubers, which comes after it recently introduced additional measures regarding potato imports.

With only three outbreaks of ring rot in the UK previously, and none since 2005, the first few months of 2013 saw two incidents identified by FERA’s Plant Health and Seeds Inspectorate (PHSI). One was an interception in a consignment of ware potatoes from Poland the other was an outbreak from contaminated seed stock from the Netherlands.

“As imports of ware and seed potatoes have risen following the shortfall in the UK harvest last year, the risk posed by this potentially devastating disease has heightened,” warns Derek McCann, principal plant heath and seeds inspector.

“Processors and traders importing large quantities of potatoes this year should be aware of the ring rot risk involved and take care with sources. Apart from the threat to the home potato industry, failure to meet plant health requirements could cause substantial financial loss to importers if their consignments are delayed or rejected.”

“Good hygiene and biosecurity measures should be adhered to. Any outbreak of a harmful organism, like ring rot, would have substantial effect on affected businesses through disruption, disposal and disinfection costs, as well as for the wider industry.”
Derek McCann, FERA’s Plant Health and Seeds Inspectorate

Across the EU, statutory monitoring involves routine testing of samples of seed and ware potatoes. To increase the speed and accuracy of finding low ring rot infection levels, scientists at FERA’s plant clinic near York, North Yorkshire, are now using the latest molecular DNA detection and identification methods, while still carrying out the more laborious and lengthy traditional bacteriological-based host tests in aubergine.

At the end of last year new import measures came in to force to monitor and trace overseas consignments in England. These are in addition to existing arrangements for seed from other EU states and ware from all non-EU sources (seed is prohibited from non-EU sources other than Switzerland). These measures now apply in Scotland, with similar action being considered for Wales and Northern Ireland.

In summary, the new legislation requires deliveries of ware potatoes from Poland and Romania, plus Spain and Portugal, to be notified in advance to PHSI.

In these latter two cases, the information is needed to help protect against Epitrix potato flea beetles, another potential threat to potato production from outside the UK.

In the case of Poland consignments must also be accompanied by a ring rot test certificate from the Polish Plant Health Authority.

“Detailed contingency plans, for monitoring, tracing and detection of the disease have proved their worth with the rapid response to this recent outbreak,” he says. “This action has resulted in timely and effective containment.

“Good hygiene and biosecurity measures should be adhered to. Any outbreak of a harmful organism, like ring rot, would have substantial effect on affected businesses through disruption, disposal and disinfection costs, as well as for the wider industry,” he warns.