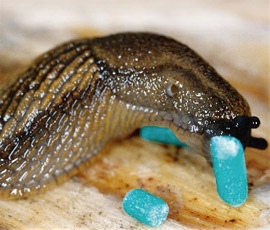 Ferric phosphate may offer growers a lifeline against slugs and greater use of the product should help to ensure that other active ingredients remain available.

Metaldehyde, methiocarb and ferric phosphate are currently the only products offering farmers protection against the destructive pest, so growers are being urged to take a more integrated approach to protect what they have got.

Dr David Ellerton, technical development director at adviser Hutchinsons, believes growers should be considering ferric phosphate as part of this approach, with it offering similar efficacy to the other products as well as a strong environmental profile.

“If we are to effectively steward the control options currently available, then it’s clear that ferric phosphate chemistry has a vital role.

Dr Ellerton highlighted the intense pressure metaldehyde is currently under following a year in which it was heavily used.

“Metaldehyde is under close scrutiny by the water companies and regulatory authorities, so we must work hard to protect it and use it responsibly, which is where an integrated approach can come in.”

“Sluxx (ferric phosphate) is a high quality, wet process, pasta pellet, and doesn’t have the same application restrictions as methiocarb and metaldehyde products, with no harvest interval, no buffer zone and no water-related issues.”

Dr Ellerton reports that both agronomists and farmers have suggested levels of efficacy of the ferric phosphate are on a par with the widely used metaldehyde.

Velcourt Farm manager Mark Edgecombe, like many other farmers, suffered from severe numbers of slugs last year but has successfully integrated Sluxx (ferric phosphate) into his programme highlighting the environmental benefits as one of the main attractions.

“The product definitely works and is more flexible in its rainfast ability and ability to use it in scenarios where you expect rain or you are near watercourses.

“Our experience is don’t be put off by the way it works. It works slightly different to other products, as you don’t see the dead slugs or the slime trails.”

Mr Edgecombe admits that cultural controls will always be the mainstay of the control process but the ability to switch to a ferric phosphate product gives another strong weapon in the fight against slugs.

Growers will be soon considering their slug protection programme in potatoes, and Hutchinsons potato technical manager Darryl Shailes says potatoes are one crop where no chances can be taken.

“Growers need to make decisions early, based on fields and susceptible varieties such as Maris Piper.”

“Methiocarb pellets are the mainstay of my programme, but we are looking to integrate ferric phosphate into the programme largely for the environmental benefits.

“We are still in the early days of using it, but so far the results have been good and hopefully, at the end of the year, we will have a better overview of its strengths in this crop,” he says.

Hutchisons agronomist Andy Hutchinons says he has had great feedback on the product, noting problems such as discoloration being ironed out over the past few years and it being a straightforward product to use.

“They spread very easily. We don’t tend to spread them over 20m, in order to get a decent spread pattern. There’s no dust associated with them and the rates we use are also fairly flexible – from 3-7kg/ha.

“Most farms will be driven by metaldehyde up to and near the limit, but then where repeat applications are needed they can go with Sluxx (ferric phosphate).”

“An average metaldehyde pellet would be about £8-9/ha. Ferric phosphate isn’t much more expensive at about £4-5 extra, which is cheaper than methiocarb.

“Obviously it is slightly more expensive but it certain cases it will be all that you can use and it is about protecting the other products, we cant risk losing metaldehyde.”

Certis’ UK marketing and business development manager Robert Lidstone believes it is going to be an educational process for growers who have not used ferric phosphate before in order to realise the benefits.

Mr Lidstone urges growers to go by plant damage rather than the dead slugs they can see.

“In the caged trials we have done with Sluxx (ferric phosphate) the percentage of plant damage is very consistent in performance with the other products.”