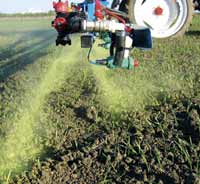 Application technique can make a 5-10% difference in the final control of blackgrass, according to new results from Velcourt trials.

That kind of change in performance is of enormous value as Atlantis (mesosulfuron-methyl + iodosulfuron-methyl-sodium) starts to lose its shine, says Velcourt’s technical director Keith Norman.

“Against a background of declining performance, we all need to learn how to use the herbicide in a better way,” he explains. “And application is an important part of that.”

Some of the work being done by Velcourt, in conjunction with Bayer CropScience, is based at the Haverholme Farm Partnership near Sleaford, Lincolnshire. Starting this time last year, it has focused on comparing different nozzle types and their performance at a range of forward speeds.

Adrian Whitehead, farm manager at Haverholme Park Farm, reports vastly superior results with variable pressure angled nozzles. “They are the best at hitting the target. The same can’t be said of air induction type nozzles – the resulting spray is simply too coarse.”

Mr Whitehead runs a 30m (98ft) Sands sprayer, with a capacity of 4000 litres. With 1000ha (2470 acres) of winter wheat to spray, his preferred forward speed is 14km/hour, creating a challenge for spray accuracy.

“But we’ve found that angling the nozzle backwards by 13 degrees gets over the speed issue and, together with a flat fan nozzle type, gives us consistent results.”

In the farm trial, his sprayer was fitted with Hawk, Bubblejet and flat fan nozzles, in 10m widths (33ft), all at 03. The sprayer was then run at three different speeds, 8km/hour, 12km/hour and 16km/hour, so that the nozzles could be compared.

“At 8km/hour, they were all similar,” he recalls. “At 12km/hour, the Bubblejet was not good and the Hawk nozzle was beginning to produce some drift. At 16km/hour, they all started to fall apart.”

Mr Whitehead adds that the Hawk nozzle was designed for forward speeds of 8km/hour, so the results with that particular nozzle type were no surprise to him.

Gary Jobling of Bayer CropScience says that the studies have confirmed that the application advice given by the company is appropriate.

“Our recommendation is to apply Atlantis as a fine-medium spray, travelling at about 12km/hour and maintaining the correct boom height,” he comments. “These studies have given us confidence in our guidance.”

Boom height is another key consideration, notes Mr Jobling. “It’s an area which causes some practical difficulties on farm. Keeping the boom 50cm (20in) above the target, which is the recommendation for flat fan nozzles, is difficult to achieve. Not surprisingly, it’s where some error comes in.”

Mr Whitehead agrees. “Having more flexibility with boom height is something we need. That’s why the Defy nozzle is of interest to us – it’s a variable pressure 84 degree angled flat fan in an angled cap – so we would be able to put the boom up to 70cm (28in) and carry on spraying at our preferred forward speed.”

He reports Syngenta research which has shown that this type of nozzle can result in a 40% difference in the number of droplets hitting the plant. “These sorts of improvements can’t be ignored – especially where resistance is creating control problems.”

Having seen a prototype for a variable aperture nozzle, which can be used for most spraying tasks, he looks forward to its commercial development. “Our 30m sprayer has 604 nozzles. That means we are spending about £1000 a year on three sets of nozzles, so there would be a considerable saving from this type opf technology.”

The application trials are continuing this year, with both autumn and spring applications being investigated further, he adds.

Just 20% of the Atlantis planned for the Haverholme Farm Partnership was applied in mid-November, leaving Adrian Whitehead with about 800ha of winter wheat to spray this spring.

“The past two years have been difficult for completing autumn work on our heavy soils,” he says. “Given the choice, I prefer to spray blackgrass in the autumn, especially where there are high populations.”

Previously, he has seen a mixture of both good and average results from spring Atlantis use, so he is adamant about waiting for good growing conditions before spraying.

“Two or three warm days, before and after spraying are important. That means waiting until temperatures are about 6C.”

He also delays until the weather forecast shows that there will be 48 hours of dry weather after application.

“And if I think more fire power will be needed in the spring, I switch from Atlantis to using Pacifica.”

Rotational and cultural control methods are employed at Haverholme, with about 12% of the farm being fallow in any one year.

“The fallow is important for blackgrass control. It allows us to use two or three applications of glyphosate, as well as cultivations, to reduce the weed burden. And as we have no second wheats on the farm, we are never using Atlantis two years running on the same fields.”

As a result, the farm has become much cleaner, notes Mr Whitehead. “But I’ve noticed that some blackgrass is starting to survive Atlantis. That’s a concern, as there’s nothing coming along to replace it.”

Higher seed rates are another cultural technique which helps with blackgrass control, he ends. “Previous work by Velcourt has shown that they can give an additional 10% control. In isolation, it doesn’t seem too impressive, but all these improvements added together have a real value.”

Part of Velcourt’s stand at Cereals 2010 will be devoted to the company’s spray application research, with plots showing nozzle performance.

Water deposition papers will be used to show the various spray patterns produced by different nozzle types, together with advice on their suitability for spray operations.

“From the pre-emergence timing, right through the season to the ear spray, there are different considerations,” says technical director Keith Norman. “As the target changes in size and shape, so should the spray characteristics.”

While the angled flat fan nozzle has proved its worth for spring herbicide application, other nozzle types have also shown strengths, he reports.