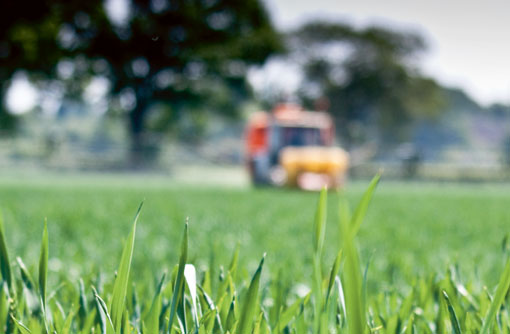 It is the age-old question: what’s the best fungicide programme for your wheat? To find out Crops magazine asked 10 Association of Independent Crop Consultants to collectively come up with the best programmes for six different situations growers might be facing this spring.

Each was asked to rank 10 treatments at T1 and T2 in order of preference for each situation based on technical and commercial merits.

To find out what they recommend click on the tabs below to view the different field situations.

Each of the test fields contain a different variety of wheat – these are:

Prospects: First wheat, grown on a site with a yield potential of at least 9t/ha.

Recommended List warning signs: Eyespot could be a concern along with septoria, and potentially brown rust, depending on season. Yellow rust resistance is good, so shouldn’t be too troublesome.

T1 analysis: While second wheats typically carry the higher eyespot risk, first wheats, particularly if early sown, can be at risk too – a one year break from cereals is insufficient to remove all the trash associated from the previous cereal crop.

That risk, along with the need to protect against septoria, is likely to have been the deciding factor for our agronomists to collectively plump for Tracker + Bravo as their preferred T1. Tracker’s first generation SDHI active ingredient, boscalid, is acknowledged as a very strong choice for eyespot control, and combined with epoxiconazole and chlorothalonil covers all three potential disease risks effectively.

The best alternative to Tracker + Bravo is Proline + Bravo – for the same reasons. Proline’s active ingredient prothioconazole is the best azole fungicide against eyespot and gives strong septoria protection. However, it is weaker against brown rust than epoxiconazole, according to HGCA fungicide performance work, which is enough to downgrade it to second choice.

T2 analysis: This is a crop going for yield, which leads our agronomists away from cheaper triazole/chlorothalonil based options at flag leaf towards the higher priced new SDHI fungicides.

All 10 agronomists put either Aviator Xpro or Adexar as top choice, with Aviator Xpro nudging the overall vote on a higher number of second preference votes. Essentially these two products cannot be split in this situation, where septoria and brown rust are the main diseases to take out, and the best possible yield responses are desired.

Further down the pecking order, Comet + Ignite + Bravo is a strong third alternative to Seguris, based on a lower price and good activity against brown rust from the strobilurin component.

Stay away from: New SDHI at T1/triazole + Bravo at T2 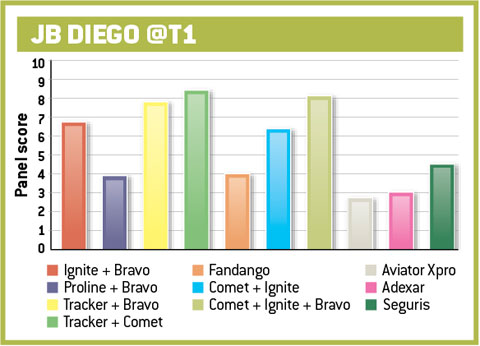 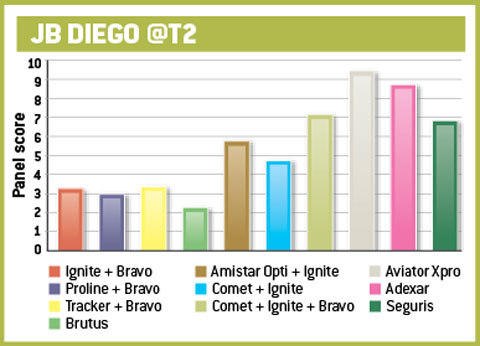 Prospects: First wheat, grown on sites with yield potential of over 9t/ha

T1 analysis: On paper, a similar situation to JB Diego, the switch from brown to yellow rust risk means the choice at T1 is much clear cut. In fact, among our agronomists, there are no less than five treatments chosen as top choice.

For most either Tracker or Comet or both should figure. Tracker will bring strength against all three key diseases at T1: septoria, yellow rust and, as in the JB Diego crops, eyespot, while Comet and potentially other strobilurins, such as Amistar, that were not part of this test, bring excellent efficacy against yellow rust.

The two products in combination sneak into top spot, just ahead of the Comet + Ignite + Bravo combination and Tracker + Bravo.

Again, even though this is potentially a very high disease pressure situation, there is little love for the new SDHI fungicides at T1 among virtually all the independent agronomists, while Proline’s weakness against yellow rust sees it drop from a strong contender to also ran, despite its eyespot strength.

T2 analysis: That all changes for the flag leaf spray, where all 10 agronomists again choose an SDHI fungicide as first choice at T2. The majority decide to go with Adexar rather than Aviator, with one favouring Seguris. That’s not surprising with HGCA data suggesting that those two products have the edge on yellow rust over Aviator.

Again, Comet + Ignite + Bravo is seen as the best non-SDHI alternative, clearly above other options such as Amistar Opti + Ignite or Brutus.

Stay away from: New SDHIs/prothioconazole at T1, triazole + Bravo at T2 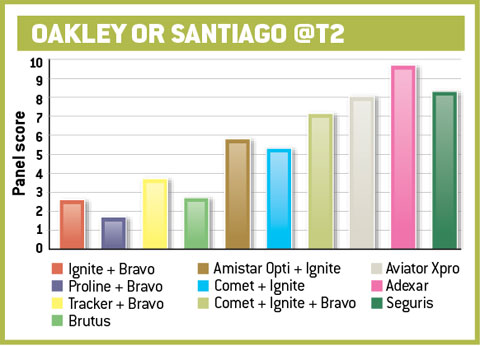 RL warning signs: Everything and mildew. Since the emergence of a new yellow rust race, Solstice can get virtually every foliar disease going.

T1 analysis: Solstice is not dissimilar to the Oakley/KWS Santiago situation, with the same three treatments rated ahead of the rest. With yellow rust maybe not quite as extreme as in Oakley, Tracker + Bravo regains pole position, while Comet + Ignite + Bravo drops back to third behind Tracker + Comet.

Mildew would also need to be considered at this timing, but in many cases a specific mildewicide would be added, which has been assumed by the agronomists in making their choices.

T2 analysis: The lower yield potential of the milling wheat has made no difference to the agronomists’ enthusiasm for the new chemistry. Adexar is the clear first choice again, with yellow rust a risk, along with septoria, but because it is not quite so as severe as in Oakley, Aviator comes through to be second choice above Seguris.

Comet + Ignite + Bravo is again the main non-SDHI alternative for our agronomists.

Stay away from: New SDHIs at T1 and triazole + Bravo at T2

Prospects: First wheat with a yield potential of 8-9t/ha

RL warning signs: Brown rust because a new race appears to infect both varieties, and yellow rust for Warrior, again because of a new race. Good septoria resistance.

T1 analysis: With good disease resistance comes the chance to reduce spend on fungicides, and the three cheapest options have been selected at T1. There is literally nothing to choose between the two azole fungicide + Bravo options and Tracker + Bravo, according to our agronomists.

The new rust risks on both varieties are not considered severe enough to warrant a strobilurin fungicide, although the strobilurins do make up the next tier of choices before the new SDHI chemistry.

T2 analysis: The excellent septoria resistance within Warrior and Stigg also diminishes the argument for the SDHI chemistry at T2. It is still in the mix, with especially Aviator Xpro strongly considered by some agronomists, but the cheaper strobilurin mixes, with their good rust control are as popular a choice on varieties which don’t respond to fungicides anywhere near as much as most other varieties.

Top of the pile is Comet + Ignite + Bravo, which comes out ahead of Comet + Ignite. Again, the septoria resistance factor shows up in the choices, with Comet + Ignite without the Bravo getting favour over Amistar Opti + Ignite, unlike in every other scenario tested.

Stay away from: New SDHI chemistry/Brutus 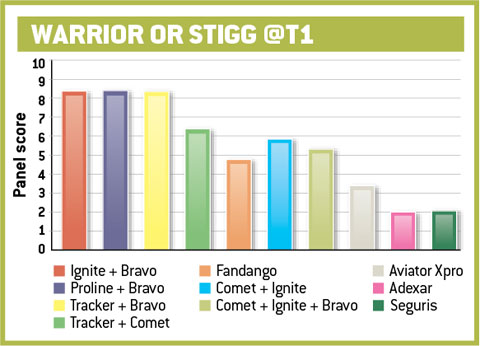 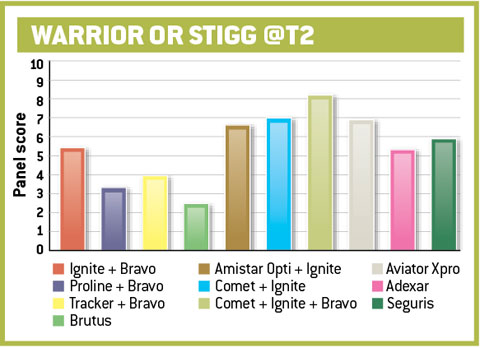 T1 analysis: Tracker + Bravo cements its position as the T1 of choice for many of the agronomists in most situations. A good all-rounder it covers the weaknesses of these soft wheats – yellow rust and septoria in Viscount, septoria and eyespot in Invicta.

Again using a strobilurin at T1 is popular, where there is a rust risk, while Ignite + Bravo has a place.

T2 analysis: Pushing for yield is just as important for soft wheats, whatever the outlet for the grain – biscuits, export, bioethanol or distilling. For the latter two, high yields help dilute proteins, increasing alcohol production.

So it is no surprise the SDHI fungicides are seen as important at T2. Aviator Xpro tops the poll, but again the choice between Aviator and Adexar is more a personal preference decision. Seguris is seen as a third choice, along with Comet + Ignite + Bravo.

Stay away from: New SDHIs at T1 and triazole/Bravo at T2 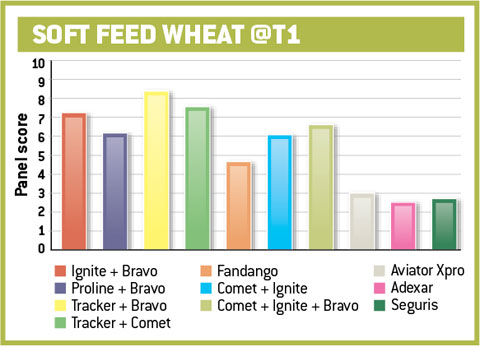 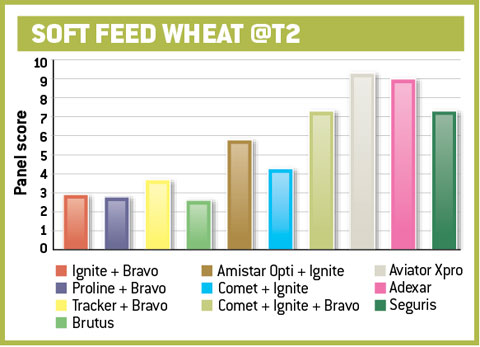 RL warning signs: Everything. Disease resistance is not a strength of Duxford.

T1 analysis: As a second wheat the stem-based diseases become more of a priority at T1, including take-all. That explains why Fandango jumps from being an also-ran at T1 in first wheat situations to a strong alternative to Tracker + Bravo. That combination again proves itself to be a favourite because of its all-round strengths.

T2 analysis: At T2 the strobilurin mixes including Bravo, are slightly favoured over the new SDHI fungicides. The yield cap on second wheats means these cheaper options gain ground over the more expensive SDHIs.

Top choice from the three strobilurin treatments is Comet + Ignite + Bravo, with Amistar Opti + Ignite second. Our agronomists are not in favour of missing out the chlorothalonil from the strobilurin mixtures, favouring the use of Adexar or Aviator Xpro over Comet + Ignite.

Stay way from: New SDHI fungicides at T1 and Brutus at T2 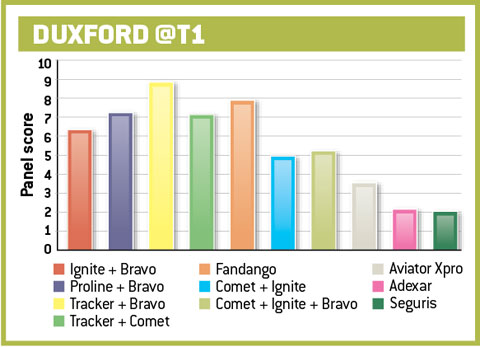 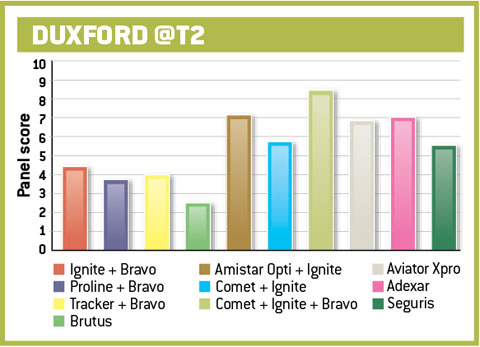 Instructions and assumptions made by panel