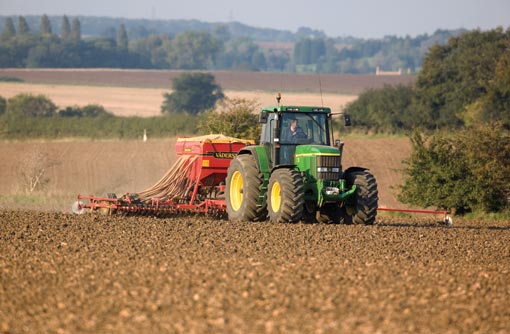 As a result, there’s a likelihood that there won’t be quite enough to go round for the autumn 2013 drilling campaign, warns Peter Stacey of Bayer CropScience, who is keen to make growers aware of the latest situation so that they can put alternative plans in place.

“Due to the effects of the fire, we simply won’t have as much of the product as we had last year.”

That said, he points out that 2013 supplies of the seed treatment will be greater than they were just two years ago in 2011, despite the fire’s impact.

“The supply situation is compounded by the fact that demand has gone through the roof. Based on what our customers are telling us that they need, there isn’t enough to go round.”

The combination insecticide and fungicide treatment has proved itself in terms of barley yellow dwarf virus control, allowing growers to almost eliminate the need for autumn pyrethroid sprays and giving them some leeway at a very busy time of year. It has also shown itself to be a useful deterrent against slugs.

Containing clothianidin and prothioconazole, the seed treatment is approved for use on all cereal crops and also offers control of seed-borne diseases.

Just in time for this autumn, Chemtura’s Rancona i-MIX has been approved for use on wheat.


Launched last year for the control of seed- and soil-borne diseases in barley, the ipconazole-based treatment can now also be used on winter and spring wheat.


Control of fusarium species and microdochium nivale, the causes of seedling blight, as well as bunt, are on offer from the product.


The recent wheat registration means that Rancona i-MIX comes to the market at a time when it is most needed, as some of the alternative wheat seed treatments are expected to be in short supply and the wheat area is likely to increase, points out Iwan Jenkins of Chemtura. “Rancona i-MIX adds to the seed treatment options available and will allow growers, many of whom are hoping to address this year’s shortfall, to stick to their drilling plans,” he says.


Unlike some other triazoles, ipconazole has no negative growth regulation effect, notes Mr Jenkins. “In effect, treated crops get off to the best start. That’s something that could be important this autumn, as a late harvest looks likely to be a reality.”


Furthermore, seed merchants will be able to exploit the product’s dual use on wheat and barley.

Unfortunately, there are no seed treatment alternatives to Redigo Deter. Growers could switch to a single-purpose dressing and then follow up with early pyrethroid sprays, as they used to do, or target the limited amount of the product to the situations where it is most needed.

However, the discovery that grain aphid populations are carrying resistance to pyrethroids is a concern for the former approach. Although the grain aphid is the less important vector of the two species that transmit BYDV, it does mean that foliar sprays may not be effective if it is the main aphid pest present.

“Hopefully, there will be less pressure in terms of BYDV this autumn,” says Mr Stacey. “And if it stays dry from now on, the slug situation won’t be anything like as bad as it was last year.”

Early-drilled crops, which are most at risk from aphids, should be a priority for the seed treatment, as well as those at higher risk of slug damage, he advises.

Clare Bend, Agrii’s head of technology, is concerned that there will be a big push for early drilling this autumn, after wet conditions prevented many growers from getting their full quota of wheat in the ground last year. “And that means there will be pressure on seed production and availability, as well as seed treatment supply.”

Early-drilled crops are more at risk from BYDV, she warns. “They’re the ones which will need Redigo Deter. It seems as though there will be just two-thirds of what’s needed, so growers are going to have to use common sense in deciding where and when to use it.”

Visit our wheat page for crop news and information