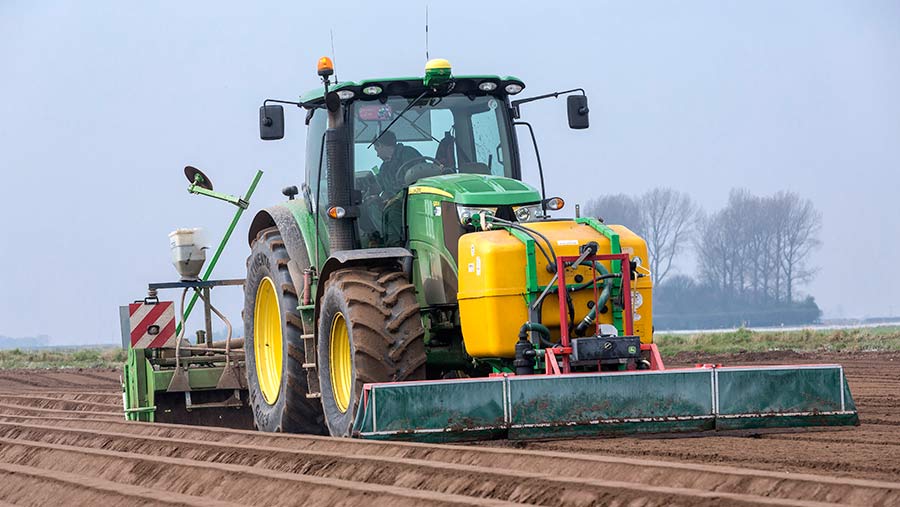 The first in-furrow SDHI fungicide for potatoes offers farmers another option for controlling a key tuber disease that can slash marketable yields by 30%.

Black scurf, caused by the fungus Rhizoctonia solani, is a blemish disease of potatoes that reduces the amount of marketable potatoes through a combination of lower yields and higher levels of rejects because of the surface blemishes.

Although growers can successfully control the disease with azoxystrobin, it can prove harsh on plants leading to delayed emergence.

However, from next season growers will have an alternative that is less harsh, said Basf campaign manager Matthew Goodson at the recent British Potato event in Harrogate.

Based on the SDHI active fluxapyroxad, the new potato product Allstar outperformed the in-furrow strobilurin in independent German trials.

He observed that the SDHI-treated crops emerged and grew away faster.

Mr Goodson highlighted that SDHI are particularly valuable in a slow emergence year such as last year.

“If you consider a 10% improvement, in 2016 when it was taking up to five weeks for emergence, this equates to five days.”

He also believes some of the yield increase with the SDHI was down to the canopy staying greener, a similar greening effect as seen in cereals.

The SDHI fungicide also has approval for use on seed potato crops.