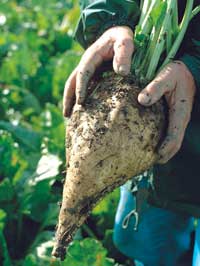 Any day now sugar beet growers will learn whether the NFU and British Sugar have agreed the basis for a new multi-year contract to end the disruptive cycle of annual negotiations.

But what is being debated, why is a solution so evasive and is agreement likely this spring?

The battle for a long-term replacement for the Inter-Professional Agreement has run for years, with annual stand-offs over the price and associated technical issues.

Grower power has played its part. In 2008 over 300 growers, representing 15% of the UK crop, met on a Fen farm outside Whittlesey, Cambridgeshire. Their actions helped pave the way for a £2/t price rise, worth £14m to growers.

Last year’s hardline approach by the NFU called for £34.50/t. That left BS “at a loss to understand” how such a price could be arrived at. Wheat and oilseed prices would need to double for the profitability gap with beet to be maintained, BS’s Karl Carter commented.

Another meeting at the East of England showground, near Peterborough last September saw 600 growers responsible for over two million tonnes of beet air their views, including the fear that bioethanol was diluting the core beet price.

But grower power only goes so far. Producers have widely differing capabilities and different price aspirations. And BS knows that.

In recent years it made no secret of the fact that it had expressions of grower interest in 350,000t of extra beet production. That is over and above the existing 800,000t of temporary tonnage – equivalent to 14% of the national crop – which will be grown without the £1/t extra transport payment this year.

Indeed, that extra £1/t will only be added to the rest of the crop if the basis for the new multi-year agreement can be struck by the self-imposed deadline of 31 March.

A big part of the impasse has been grower frustration that BS won’t share the fruits of what most perceive to be a significant rise in profits in the sugar sector.

In the UK, BS’s sharp recovery in profit reversed a declining trend over recent years. The main drivers of the turnaround were robust sales, good factory performances, a strong euro, a reduction in the restructuring levy, favourable energy costs, favourable UK growing conditions and extra contributions from the combined heat and power plants at Bury and Wissington, supplying electricity to the grid at high prices.

Last October Richard McDonald, then director general of the NFU, and Mark Carr, chief executive of BS Group, agreed that the old approach to annual negotiations was “untenable” and that a fresh start was needed.

The £34.50/t call from the NFU and the associated standoff with BS was the old way of negotiating, admitted NFU sugar board chairman and Cambridgeshire farmer William Martin.

The new negotiations aim to secure the “ingredients for a longer-term contract”, replacing annual negotiations up to and including the 2014 crop. From October 2015 a new EU sugar regime is expected to be implemented.

Indeed, a united front to debate the future of the EU sugar regime, which includes the last remaining commodity quota, is a further good reason for securing a new contract, argues Mr Martin. “We want to stand shoulder to shoulder with BS when we are arguing the industry’s case in Whitehall and Brussels, to secure benefits for us all, rather than squabbling amongst ourselves.”

That is a view which BS shares. “We have been involved in extensive discussions and continue to work with the NFU, remaining committed to coming to a final agreement on the way forward for the sugar industry,” a spokesman told Crops in early February.

A third party moderator has been appointed to help keep the negotiations on track. If agreed, the new four-year framework will not be reviewed for two years, after which either BS or the NFU could instigate a limited review of some elements.

But if the framework for a new contract is not agreed by 31 March, the old IPA rules allow for a resolution to be imposed by a third party, possibly DEFRA. Neither side wants that.

The negotiations are private and little has been leaked. But five key issues need resolving:

This is the most ticklish part of the negotiations. A flexible formula has been proposed, to account for growers’ costs and the relative profitability of other crops. A fixed price or minimum price contract could result for each campaign, replacing the current “blank page” annual negotiations.

In the past, BS said it was happy to use grower costs in a formula, but suggested growers were not sufficiently realistic. Its own survey of 250 growers showed an average net margin (pre-rent and finance) of £489.05/ha, with the top 25% of growers achieving £964.90/ha.

But growers note that the “cost-plus” approach did not work in potatoes and ask whether all costs would be included, such as road repairs after heavy machine use and lower yields in subsequent wheat crops? Index linking to inflation may be better, some say.

Furthermore, when pitching a beet price to keep the crop competitive in the rotation, is wheat the best benchmark? Should vegetables and potatoes feature too? And what wheat price should be used – a November futures price, or something later, to reflect later harvesting?

So far BS has been reluctant to include changes in its processing costs in any formula.

The NFU and BS jointly commissioned an independent study to investigate the potential for greater efficiencies in haulage, the conclusions of which are now being debated. An ex-farm price, effectively transferring haulage costs to BS, together with an end to transport allowances, have been favoured by the NFU in the past.

The NFU is keen to see payment for everything growers grow, based on whole beet sampling. “We think it makes sense for the whole industry if growers deliver every bit of beet that is grown and are paid for it,” says Mr Martin. Technical innovations, like Grimme’s new flail-only topper, with no scalping knives, add to that argument.

Currently manual crown sampling establishes what proportion of delivered beet is deducted as crown – the top part of the beet that is less suitable for processing. BS has said its existing contribution for crown sugar is “pretty exclusive” in Europe.

More appropriate compensation for late deliveries is being sought, to ease the impact on growers of the longer processing campaigns BS favours to make the most of its investments in processing factories. Last year its Newark factory took beet as late as mid-March, for example. At the time BS said the extra £3/t it paid would more than compensate growers for losses, provided they had played their part in protecting crops from the elements.

This is a complex area, involving BS purchasing additional beet, beyond quota tonnages, primarily for bioethanol production. It attracted little interest in the first year and then substantial over-subscription in the second year. A clearer system, with clearer rules, is wanted by growers.

While cagey about progress, both sides are hopeful about a positive outcome. An end-game was felt to be in sight as Crops went to press in early February.

But the last word goes to Mr Martin. He urges growers not to simply tick off concessions won from BS or to count pound signs. “If people just look at this negotiation in terms of achieving such-and-such a benefit, or a certain price rise, they are missing the point. It’s not about winners and losers. We want to go beyond that and believe there is real scope here to unlock some significant benefits for the whole industry.”

The clock is ticking. Growers will soon know what benefits have been achieved.