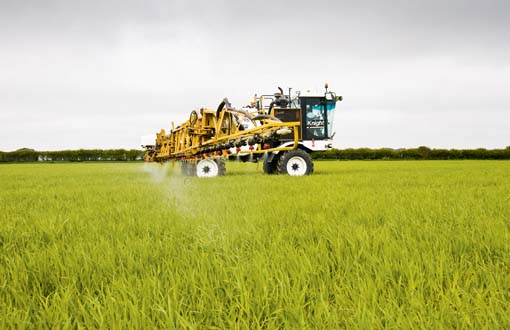 The basic building block of a solid azole fungicide – usually either epoxiconazole or prothioconazole – with good activity against a range of key diseases, especially Septoria tritici should remain unchanged.

But which components to add has always been the key question, and has only been complicated by the arrival of second-generation SDHI fungicides Aviator Xpro and Seguris.

Both offer the potential of a one-can option, containing one of the two key azole fungicides plus a new SDHI fungicide. But the older options of strobilurin plus azole, or highly loaded formulations of more than one azole fungicide, still remain, as does the more basic triazole fungicide plus chlorothalonil option.

What to use will, to a large extent, come down to what situation growers are faced with, with disease pressure, yield potential and rainfall, all to the fore.

So to provide some guidance on which treatments might be best suited to specific scenarios, Farmers Weekly asked nine agronomists from around the country to rate six key treatment options in eight different situations.

The chosen treatments represent most of the different options growers could choose between – new SDHI chemistry, triazole plus strobilurin, highly loaded triazole formulation, and triazole plus chlorothalonil. Each contains at least a three-quarter dose of triazole fungicide.

While specific treatments are named, other similar options could be read across. For example, the strobilurin, Comet, could be replaced by an azoxystrobin product, such as Amistar Opti, and Ignite by any of the other epoxiconazole formulations. Brutus has a similarly narrowly distributed cousin in Ennobe.

All of these treatments are good options. When asked to rate each for efficacy against key diseases on a zero to five basis, with five being excellent efficacy, all were given at least 3.5 on average for each disease (see table).

The scenarios have been chosen to represent what disease pressures growers could be facing this season in different parts of the country, and to take account of the dry April and May, and the impact that might have had on yield potential in some cases.

Mildew hasn’t been included, although it has been an issue this season, as it will usually require an additional product, such as Talius (proquinazid), Cyflamid (cyflufenamid) or a morpholine, in the mix.

Each of the nine advisers has ranked each product in order of recommendation from first to sixth. On the charts, the higher the bar the more popular the product with the advisers for that situation. 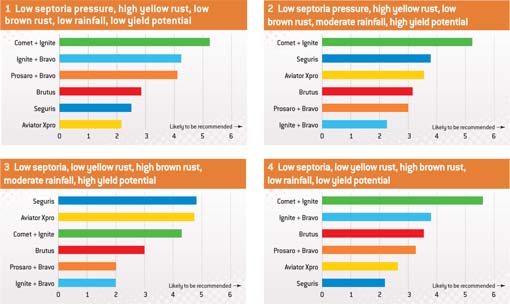 Yellow rust has been the key disease so far this season. It has been sighted in crops before both T0 and T1 treatments, and not least because of the large proportion of susceptible varieties in the ground, it is likely to be a key target disease for flag leaf treatments.

Even growers with resistant varieties would be wise to keep an eye out for it, as several reports of infections in cultivars with eight or nine resistance ratings have been made by agronomists.

Where yellow rust is the only disease of note (chart 1 and 2), a strobilurin plus epoxiconazole, represented by Comet + Ignite, is first choice for the agronomists. Four of the nine advisors have it as first choice, none lower than third.

High rust pressure and low septoria pressure clearly plays into the hands of a strobilurin mix, with proven strength against rusts, and the lack of activity from the strobilurin against septoria is less of a concern.

Where crops are suffering from the drought, and/or yield potential is low (chart 1), the next best options are the triazole fungicide plus chlorothalonil options, according to the results.

But where yield potential remains good (chart 2), then the new SDHI fungicides jump from being last choice to second and third choices. Advisers seem convinced about their ability to provide the yield responses on high yielding sites to pay the premium price, but less so about their ability to control yellow rust as effectively as a strobilurin.

The dry spring, for many, will have dampened down septoria pressure, but some advisers believe there is still a risk from the disease. If May or June turn wet, inoculum in the bottom of the crop can still jump quickly from the lower leaves to the important yield-producing upper canopy, not least because most crops are so short this season.

And while it has been bone-dry in the east, there have been morning dews created by low overnight and high daytime temperatures that could have created septoria inoculum, which shouldn’t be disregarded.

Where septoria pressure is higher, and yield potential is good, the new SDHI fungicides are seen as first choice. Where neither rust disease is an issue (chart 7), then all bar one adviser has Aviator Xpro ranked as first choice. According to HGCA trials comparisons, it is the stronger septoria product out of the two new products.

But Seguris has its place where rusts are also an issue. The HGCA trials show an advantage for Seguris, particularly on yellow rust over Aviator Xpro. Those concerns over Aviator Xpro’s yellow rust efficacy drop it just behind Seguris, where that disease is also an issue (chart 6), and make the decision less clear cut if both septoria and brown rust are a problem (chart 8).

Rust also brings Comet + Ignite back into the equation. Where yellow rust pressure is high, it is a realistic alternative to the new products, and a clear third choice when brown rust is likely to be a concern.

If rust isn’t an issue (chart 7), then the high loading triazole, Brutus, rises into third place, on the back of its greater septoria efficacy. But some advisers have been put off recommending it by its price and segmented marketing profile. 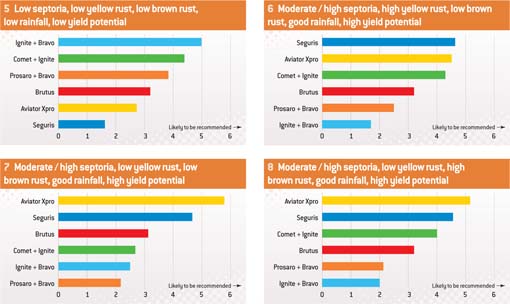 Brown rust hasn’t raised its head much this season yet. But it is favoured by warm, dry weather and the conditions in April have raised the potential for it to become a problem from flag leaf onwards. Like yellow rust, there are a number of key varieties in the ground with a distinct susceptibility to the disease.

In contrast to where just yellow rust pressure is high, when the advisers have shied away from the new SDHI fungicides, they are happy to continue to recommend them if septoria pressure is low and brown rust pressure high (chart 3) as well as where both diseases are a problem, as long as yield potential is good (chart 8).

The strobilurin option is also a contender in a high yield, brown rust only situation (chart 3) and becomes the most popular choice if yield potential is low (chart 4). In that scenario, the SDHI fungicides drop to the least attractive choices.

The last scenario is where disease pressure is uniformly low (chart 5), but the crop potential is also low, either through soil type or drought stress. In that situation, the cheaper options come to the fore, and in all likelihood, the rates used would be lower than the ones stated here.

A straightforward mix of epoxiconazole + chlorothalonil is top choice, with a strobilurin mix second. There is a case in this situation for utilising the strobilurin’s physiological properties, and at least one adviser is tempted to try one of the SDHIs for their supposed drought-overcoming properties. But, for most agronomists, the new products are unlikely to be recommended in this scenario.