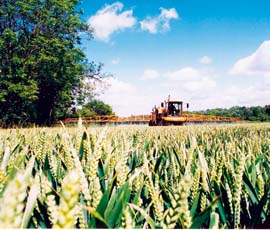 Milling wheat growers contemplating the need for late foliar nitrogen are facing one of the biggest conundrums of the season, experts agree.

Not only are lower-yielding crops unlikely to have much of a requirement for late nitrogen, the timing of any necessary applications may also need to be bought forward to take account of this year’s faster crop development, they point out.

In addition, poor or damaged root systems may have affected the crop’s ability to respond to existing nitrogen. For some, that means late foliar applications could be a good way of getting nitrogen into the plant.

Deciding which crops will benefit from foliar applications requires knowledge of the amount of dry matter produced to date in the field, as well as the concentration of nitrogen already in the crop, advises Mike Slater of Frontier Agriculture.

“In the south and east, there are many crops which won’t reach yield targets,” he says. “Some 2t of dry matter are needed for every 1t of grain, yet there are crops with just 10-12t of dry matter in the field at the moment.

“If the total crop mass is going to be down, the amount of nitrogen needed will be less. These crops may have enough nitrogen already.”

However, elsewhere in the country, where moisture hasn’t been limiting, crops have every chance of fulfilling their potential, he says. “If they yield as expected, there will be some dilution of grain protein. They will need the extra to guarantee the milling premium.”

Testing flag leaves for nitrogen concentration is one solution, he suggests. “It may be too late to do this in the south, as crops are already in ear. But a reading of 4-4.5% means there is sufficient nitrogen in the crop to achieve the milling specification.”

Testing milky ripe ears is another possibility. “It’s the subject of a current ADAS research project,” he says. “There’s a close correlation between the nitrogen concentration in the ear at this timing and the target grain protein.”

Nick Myers of ProCam points out some earlier-applied nitrogen is now available to crops, following recent rainfall. “They’ve certainly improved in colour. It means the grain proteins in these crops will be good and shouldn’t need too much more.”

But where urea was applied in the spring, there will have been volatilisation losses in the dry conditions, he says. “It won’t be available now, so even drought-stressed crops might benefit from late treatments. The type of fertiliser used is extremely relevant this season.”

“Even though most areas have now had some rainfall, the question that’s difficult to answer is whether crops have got good enough root systems to get the residual nitrogen. If the ground hasn’t cracked up too much there will be some uptake.”

But relying on a poor rooting system is risky, he warns. “It costs around £40/ha to apply a product like Nufol. With premiums and grain prices at their current levels, it’s worth making a late application.”

Applications should be made seven to 10 days earlier than normal, he recommends. “That means the Cereal Event is the key timing this year.”