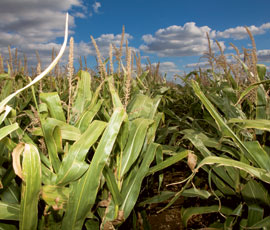 Using a maize foliar spray may prove useful for those producers facing prolonged drought or less than ideal growing conditions.

When drought is a problem or maize crops look poor, using a foliar spray could mean the difference between keeping 10% of the crop alive or not, said Maize Growers Association agronomist Simon Draper.

“However, a subjective view on individual crops will need to be taken as to whether a foliar spray is relevant – it is by no means a blanket panacea.”

When to use a foliar spray

In general, Mr Draper said any maize crops which were drilled early in the season were looking good, so would generally not benefit from an application of foliar spray. However, those caught out or forced to drill on dry soils may see some benefit from doing so.

Depending on product, most foliar sprays are applied at the 6-8 leaf stage, explained Kingshay technical manager Peter Shipton.

“It potentially could be a good year for foliar sprays – when a plant is under stress, anything you can do is positive.

“In a dry year, the crop may have reduced rooting, so by applying a spray – which is basically a foliar fertiliser – you are overriding the root system so the plant is getting the nutrients it needs from the spray.”

However, Mr Shipton said foliar sprays would not override moisture stress itself and Kingshay trial work has seen limited benefits of using them.

Mr Shipton also stressed the importance of weed control this season because stressed maize plants will struggle to compete for moisture and light.

“Pre-emergence sprays probably haven’t worked as well, so if you have done a pre-em spray, it is likely a post-emergence spray will be needed in most situations.”

But, Mr Draper said although foliar sprays may result in an initial improvement in growth, this rarely translated into end yield benefits when the crop was initially healthy.

“Foliar sprays can result in increased crop ripeness, allowing the crop to be harvest earlier, but there is usually only a two to three-day difference.”

At the very most, it may mean crops can be harvested one week earlier, but mostly there will be a two to three-day difference. Therefore, spraying may only be beneficial if you can take advantage of this window of opportunity.

The type of foliar spray used is also worth considering. Sprays usually contain either manganese or magnesium – when the crop is deficient in these elements, foliar sprays could help.

For example, when a crop is low in manganese, plants may appear yellow and floppy. Applying a manganese foliar spray can stop the crop showing drought stress. Equally a magnesium deficient crop, where yellow stripes may be evident, can benefit from a magnesium foliar spray.

“Applying these elements where relevant will keep the moisture in the plant, maintain transpiration and so help in drought conditions,” explained Mr Draper.

Using a maize foliar spray is part of an overall strategy to get the most from a crop which is fundamental to the diet at Colsway Farm, Gloucester.

Dairy farmer, Martin Hope, who farms 150 Holsteins, yielding 10,400 litres a cow a year, explains that because 50% of ground is flood land, it is crucial they make the most of the limited maize acreage available.

Mr Hope is reliant on getting the crop off early so as to maintain feed supplies and establish new grass leys on one-third of the maize ground.

Last year, he decided to test a maize foliar spray on one-third of the home-grown crop and noticed a 1-1.2t/acre FW increase on ground that had been sprayed.

“Generally I thought the crop grew better and the cobs looked much better and more starchy.” Overall, quality of the total maize crop last year was high, with about 37.6 starch and an ME of 11.3.”

Foliar spray will now be applied to all of this year’s crop and will be part of an overall strategy to get the most from maize which includes sub-soiling every two years, and using slurry effectively, rather than artificial fertiliser.

According to Mr Hope, using a maize foliar spray is well worth it in terms of costs an acre, however it is not a rescue remedy.

“A maize crop has to have a good start. When the crop is drilled in dry ground it won’t establish – whatever you do, you are not going to get maize to grow.”