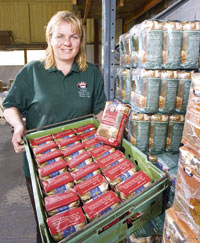 There are “significant opportunities” for using provenance in the cereals sector, according to a recent HGCA report. Paul Spackman visits one Cambridgeshire farm showing how it works in practice

When wheat prices slumped to £60/t in the late 1990’s, Rebecca Rayner decided enough was enough. She wanted to continue running the farm near Huntingdon that she had taken over after her father died in 1994, but knew that, at just 500 acres, it would be difficult to make Glebe Farm commercially viable at such low prices.

“I didn’t think there was any point trying to get bigger just to compete on price, so I decided to go down the added-value route,” she says.

The rotation of feed wheat and oilseed rape hardly lent itself to added-value crops, but Ms Rayner, who has an agriculture and food marketing background, was determined to make it work. “It was at the time when farmers markets and the organic movement were becoming more popular, so we decided to have a go at making bread from other people’s flour to sell at a farmers market near Oakham.” At the same time half the farm was converted to organic status and milling varieties were introduced into the rotation. “We wanted to spread the risk, so didn’t convert the whole farm to organic,” she notes.

As sales of the homemade bread increased, Ms Rayner decided to start milling her own flour. Initially this started on a very modest scale, using a small electric mill in the farmhouse kitchen to make flour for up to 100-150 loaves a week. Organic flour was bought in while Glebe Farm completed its two-year conversion process.

Perhaps the biggest break came when Ms Rayner spotted the increasing popularity of bread-making machines around 10 years ago. Customers were asking for advice on how to make the best loaves, so she decided to produce her own ‘just add water’ mixes from grain grown on Glebe Farm, as well as offering her own bagged flour. This enabled the Glebe Farm brand to expand beyond farmers markets and in to independent shops across Cambridgeshire. 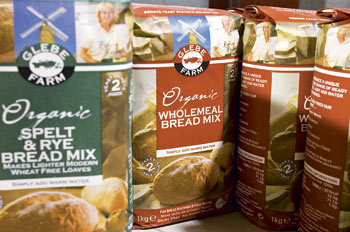 The business – called Glebe Farm Foods – has expanded significantly since then and supplies around 120 tonnes of flour to a number of UK and overseas buyers. Around half is milled using the farm’s two second-hand stone mills and the remainder is milled at local windmills – Wicken and Over in Cambridgeshire and Whissendene near Oakham. All is packed on the farm, using converted farm buildings.

“We make mainly wholemeal flour here and get the white flour milled elsewhere because it’s a bit harder to get the quality,” Ms Rayner says. “It’s also good to support the local windmills.”

She has tried to restrict the costs of the flour enterprise by buying second-hand equipment – much from ebay – and carrying out a lot of the maintenance with the farm’s existing staff. Just one full-time person is employed by Glebe Farm Foods, although Ms Rayner does a lot of the marketing and business planning and some part-time office help is also used. The farm’s three full-time staff “double-up” to work on the flour milling business when needed, particularly on tasks such as equipment and building maintenance.

The Glebe Farm brand has been central to the business’ growth, Ms Rayner says. The farm’s logo and contact details are printed on the packaging of most of the 17 different product lines and the website features a range of information about the farm, including a monthly newsletter explaining what is happening on the farm.

“Much of the feedback we receive is about the fact that people knew where the product came from, how it had been grown and where it had been milled. Provenance is a big part of what Glebe Farm stands for, and has played a major part in helping the brand to grow.”

By listening to customers at farmers markets, Ms Rayner identified the need for a range of flour products suitable for people with intolerances to wheat, so began growing and milling spelt and producing a range of gluten-free products. She secured national distribution for her gluten-free range in 120 Waitrose stores, which has now increased to 175 stores nationwide. This is on top of selling her organic bread mix in 15 local Tesco stores and at farmers markets in Bedfordshire and Cambridgeshire via a third party. The product range continues to expand with 400g cake mixes added recently and 25kg bags of flour sold to local restaurants. “We probably do need to thin out the number of different products a bit,” she says.

UK Trade and Investment – via the East of England Development Agency – has provided a great deal of help with market research, funding advice and advertising, Ms Rayner says. “We had to pay £250 to join initially, but it’s been well worth it.”

But it is the international flour market that offers some of the most exciting potential, Ms Rayner says. Glebe Farm already exports £10,000-worth of flour products to the Middle East, Ireland and Denmark. “We’re also looking closely at the French market, where bread-making is just starting to become more popular – they’re probably at the stage the UK was 10 years ago.”