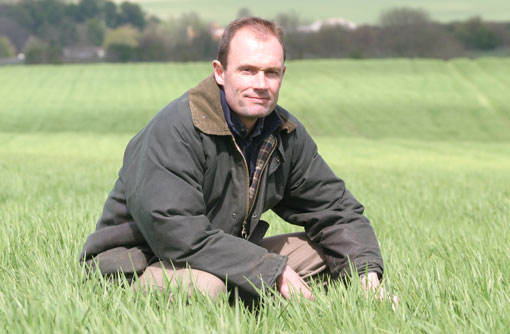 As our blackgrass was growing fast, we have gone ahead and applied Atlantis (iodosulfuron + mesosulfuron) – despite fears of wet leaves in often gloomy conditions – by sneaking in a load or two around lunchtime. There are increasing reports locally of resistance to Atlantis and I haven’t heard of any new chemical cavalry men riding over the horizon.

However, perhaps we could look to biological methods? For instance, scientists in the USA have discovered a type of bacteria that, when applied once to the soil, will almost completely suppress their species of brome for several years.

For now, though, there are fields requiring fallowing or a double break to get on top of the blackgrass, which won’t help in any drive for increased production. Neither it seems will another group of pests (resistant to all farmers’ efforts at control) – politicians.

There appears to be no argument that we will need to vastly increase production to feed a booming population, but how? Surely if we don’t significantly intensify production in areas that are already cultivated then huge areas of uncultivated land are going to be cleared and brought into cultivation. This could be disastrous in terms of loss of ecosystems and increases in greenhouse gas emissions and will dwarf the benefits of 7% set-aside in the EU.

Forcing high-potential, already cultivated land out of production could be a crime against humanity. So that good intentions do not backfire, politicians and environmental pressure groups need to think on a global scale and positively encourage intensification on such land by boosting research and the uptake of new technologies. Large, efficient businesses will be key in delivering more food at little environmental cost.

Encouraging a misplaced rural idyll of small traditional farms will not feed the world or save the environment – nostalgia isn’t what it used to be.

Andy Barr farms 630ha on a mixed family farm in mid-Kent, including 430ha mainly of winter wheat, oilseed rape and spring barley. The rest is taken up by an OELS scheme and grazing for 500 Romney ewes and 40 Sussex cattle.

Read more from Andy and our other Arable Farmer Focus writers.