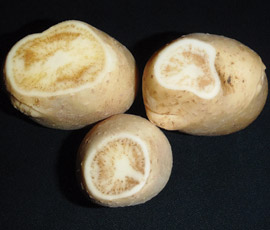 A new potato disease that could devastate the UK processing industry will be central to a discussion on non-indigenous diseases at a key international potato conference being held in the UK in May.

Zebra chip has cost the US potato industry millions of dollars in production and processing losses since it was first reported in 2000.

The disease, caused by a bacterium, Candidatus Liberibacter solanacearum, is spread by the tomato potato psyllid, an insect native to southern North America. It was first described in Mexico in the mid 1990s, spreading through Central America and reaching the US in 2000, where it first became described as Zebra Chip. This is due to the bacterium causing some of the starch stored in the potatoes to convert to soluble sugars. When the potatoes are fried the sugar caramelises, creating undesirable dark stripes.

It is now found up the east coast of North America and into Canada, and it spread to New Zealand in 2006.

It was this transfer to New Zealand and the dramatic impact on the potato industry that prompted Australian biosecurity consultant for Ausveg, Kevin Clayton-Greene and other industry personnel, to become involved in raising awareness of the disease in Australia.

Their concern was primarily the risks that the disease posed to the Australian potato industry. “Experience has shown that wherever this has occurred, in the initial outbreaks it has usually cost about 20-30% of the GDP of the industry.”

It affects the chipping, crisping and fresh markets, reduces yields up to 50% where the psyllid alone feeds, and when carrying Liberibacter the whole crop can be lost, he adds.

The symptoms of psyllid damage, yellowing, curling of leaves and aerial tubers, can be difficult to differentiate between other diseases. Control of the pest is extremely difficult and it spreads about 100m a week, which is very fast, he explains.

Most psyllids are found in the lower half of the plant canopy making it difficult for sprays to penetrate. Integrated pest management measures go out the window as growers are putting an average of 18 sprays on one crop, adding between NZ$800-1,500/ha (£415-780) to the cost of growing potatoes, depending upon location and end market, he says.

Although Zebra Chip has not reached Australia, at least Aus$100,000 (£65,300) has been spent to date on a research and prevention strategy, funded through grower levy, government and private companies.

Dr Clayton-Greene is involved in developing action plans and policies and providing an industry viewpoint back to government. Australian researchers have also participated in the New Zealand psyllid monitoring programme.

“We hope that we never get it and we have to be vigilant. When or how they get here will be problematic,” he says.

Speculation as to how the disease arrived in New Zealand from the US is endless, he says. “It might have come in on a passenger, someone smuggling solanaceous plants illegally or on nursery plants.”

The psyllid’s vast host range is concerning. Its preferred hosts include tomatoes, potatoes and peppers, but it can also survive on up to 20 other plant families including many UK weed species, lettuce and ornamentals, such as fir trees.

It is this wide host range that lends itself to a number of entry pathways into yet uninfected areas. And Dr Clayton-Greene doesn’t rule out its incursion to the UK.

Based on current data about the psyllid he believes there is no reason why it couldn’t survive in the UK, especially given the milder climate in the Channel Islands, South West and Ireland. Combined with its large host range this means the UK should consider the potential risks such as imported plant material, fresh potato imports and trussed tomatoes.

Potato imports from the US and NZ are prohibited, and there have been no tomato or capsicum imports from NZ since 2000.

However, Potato Council’s Mike Storey agrees that Zebra Chip is a serious concern and could devastate the processing industry should it reach the UK.

“We are very much keeping a watching brief on what is happening internationally.”

Some UK businesses have experience of Zebra Chip in their overseas operations so they are aware of the situation, he adds.

There is no research currently looking at Zebra Chip in the UK, yet there is good information sharing internationally in terms of the disease and the psyllid. He believes that an event such as the World Potato Congress involving international speakers as well as press coverage is highlighting the risk, but he emphasises that the risk must be kept proportionate.