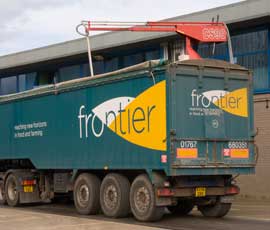 Turnover was 15% lower at just under £1bn, reflecting a period of less volatile grain prices. Profits after tax were £16.8m, a return on investment of 14%, according to a statement from chairman David Yiend.

Frontier’s previous set of results recorded operating profits of £31m on a turnover of £1.15bn.

The company, which is jointly owned by Associated British Foods and Cargill, was formed in 2005 from the merger of Banks Cargill Agriculture and Allied Grain. As in previous years neither shareholder will receive any cash dividend, with all profits being reinvested in the business.

Frontier’s chief executive Mark Aitchison said: “To achieve that level of base profitability in a quieter year is very encouraging. Everyone has enjoyed some degree of volatility in the last year making it easier to grow margins. But in the year ending June 2010 grain prices traded in a narrow band.”

Net assets worth £100m represented a trebling of the parent companies’ initial investment within five years, Mr Aitchison said. “And that reflects our strategic objective when we set up of having the strongest balance sheet in the industry.”

In the period covered by these results, Frontier re-invested £2.2m in grain storage, handling, distribution and IT systems. Cumulative capital expenditure has reached £12m since April 2005.

It was also significant that income from activities other than grain trading now contributed almost half of Frontier’s turnover, he said. “We have continued to invest in our growing crop inputs business. Our crop protection business achieved turnover of £85m, up from £43m in 2006.” Frontier now has a team of 85 agronomists.

The results demonstrated that Frontier was on track with its five-year objectives. “We’re looking to continue to develop our market share, which is currently 22% of the UK arable sector. We are also seeking to grow our serviced agronomy business to a turnover of £100m.”

Mr Aitchison reckoned that, due to higher inputs and commodity prices, Frontier’s turnover in the next financial year would exceed £1.3bn, with operating profits likely to reach £30m.