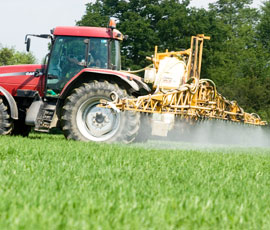 Last year’s very dry spring is thought to be responsible for some surprising results from Frontier Agriculture’s trials programme, as Louise Impey found out at the company’s recent combinable crops conference.

Better-than-expected responses to plant growth regulators in both winter wheat and barley were seen across all three of Frontier Agriculture’s trial sites in 2011, despite the absence of crop lodging.

“Remember that PGRs don’t just help crops stand, they also aid tillering and tiller survival,” he said. “That effect proved to be very important in what turned out to be the driest spring for 50 years.”

The results suggest that ignoring PGRs in a dry season is a mistake, he added. “It’s a case of using the appropriate rate in early season. In the trials, there was no need for a Terpal (chloroethylphosphonic acid + mepiquat) application in May, as crops were deemed to be short enough.”

In wheat, the average yield benefit from a split application of PGR in March and April was 8%, or 0.43t/ha, while ear numbers increased by 3.7%. That was considerably better than the 4% response to fungicides.

“We only needed to see a 0.1t/ha yield effect to cover the cost of the programme,” Mr Carswell said.

In winter barley, ear numbers went up by 5.3%, while the yield response was 0.41t/ha. “Again, we only needed to see 0.16t/ha to cover the PGR costs. So it was a worthwhile investment.”

His colleague, technical manager Bob Mills, commented that the early, pre-GS30 PGR applications give the yield response. “That later ones do the shortening and tiller survival.”

Leaf sampling has proved to be a useful technique for identifying which oilseed rape crops will benefit from late nitrogen applications in the last two years of trials, Mr Carswell revealed.

If the nitrogen content of the top leaves in canopies is lower than 4% just before treatment, results to date suggest that a petal fall application will give a yield response, he noted.

“In 2011, we recorded an average response of 0.81t/ha from delaying the final application of nitrogen until petal fall,” he said. “That was much higher than the responses we achieved with March and April nitrogen applications last year, in contrast to previous findings.”

However, leaf nitrogen content was below the guideline 4% level just before application at all three sites, regardless of previous applications, he reported. “The dry conditions between March and May could have had an adverse effect on nutrient uptake and may have affected the results. So our work on nitrogen rate and timing will continue this year.”

In 2011, the highest gross output came from a petal fall application of 60kg/ha of nitrogen, he added.

“We know that sulphur is an important nutrient and we’ve seen good responses to it in previous trials. These were more pronounced in 2011.”

However, conventional varieties were more responsive than hybrids last year. “That surprised us, as we recorded the opposite in 2010 and 2009. Again, seasonal conditions seem to have played their part.”

And for the second season running, positive responses were seen from spring applications of boron in both conventional and hybrid varieties.

“There was little, if any, effect on oil content, but the yield responses were highly economic.”

Molybdenum results were more variable. “We saw little evidence of any interactions with sulphur and there was no clear difference between hybrids and conventionals. Further work is needed.”

Very low take-all pressure in such a dry year meant there was no response to the specialist take-all seed treatments Latitude and Jockey in the 2011 Frontier Agriculture trials.

“But these results shouldn’t be looked at in isolation,” warned Mr Carswell. “Both treatments have been highly effective over the previous 10 years.”