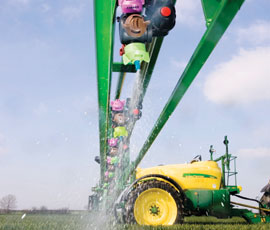 New HGCA-funded research suggests that a single fungicide application to spring barley at T1 or T2 is sufficient to maximise yield and profitability where the disease risk is low.

You may not need to spray twice, unless you are growing a susceptible variety and disease is evident, says ADAS’s Caroline Young, co-ordinator of the HGCA-funded LINK project which aimed to understand how fungicides are influencing yield.

“We believe there’s scope for many growers to cut back on current expenditure, judging by the pesticide use survey which suggests treating twice is the norm. But at the same time, we want to stress the importance of getting at least one treatment on.

“In trials over three years in England and Scotland, a single spray of a robust fungicide mixture has been sufficient to achieve a yield benefit of between 0.3-0.6 t/ha, even in resistant varieties and where there was little or no visible disease,” she explains.

Only where disease symptoms appeared after flowering in untreated plots was a second treatment found to be justified in some situations, in terms of a further yield increase. It’s pertinent to monitor disease in varieties susceptible to the key diseases – rhynchosporium, ramularia, mildew and the rusts, suggests Dr Young.

In the ADAS and SAC trials, the more disease-susceptible varieties – Optic, Forensic and Waggon – performed less well with just one fungicide than did Westminster, Quench and Garner.

The trials were based on a full-rate fungicide programme of Proline (prothioconazole) and Comet (pyraclostrobin), applied at T1 with and without a T2 applied two, four or six weeks later. There were significant effects on yield and thousand grain weight compared with untreated controls, but little difference between the fungicide treatments at the different timings.

Dr Young concludes that to maximise yield, there’s flexibility to apply fungicides between stem extension (GS30) and the flag leaf sheath swollen (GS45) depending on the susceptibility of the variety and the risk of disease.

Surprisingly, beyond early dough (GS83) there was little benefit to yield in keeping the canopy clean. That contrasts greatly with the situation in wheat, where prolonging green leaf area with a (T3) fungicide is economically advantageous, she says.

“The response to shading on light interception, yield and yield components was compared in the trials with the response to fungicides. Shading acts as severe artificial disease which can be applied and removed at will, and was provided using netting which let rain through but cut out 70% of the light.

“Shading towards the end of grain filling had little effect on yield, suggesting that protecting the canopy late is unnecessary. This is consistent with the fungicide timing results where treatment after flowering had no effect on yield, even though the canopy was kept green for longer,” says Dr Young.

Since shading during early grain development had the largest effect on yield and grain size, she believes the key time period for protection is shortly before and after ear emergence, when the storage capacity of grains is set. She and her colleagues are still working out, by a process of elimination, why fungicides improve yield in the absence of disease.

“We know there is not always a greening effect at work here. We are currently using lab techniques to look for asymptomatic disease to help us give growers the best possible advice.”

The project – costing levypayers £96,000 of the £715,000 total – should benefit the whole industry if, by using fungicides more judiciously, it can prolong the efficacy of current active ingredients.

Project no. 3458: Improving resource use efficiency in barley through protecting sink capacity; ADAS, SAC, with BASF, Bayer CropScience, Agrii (Masstock and UAP), the Scottish Government and DEFRA through the Sustainable Arable LINK programme; from January 2009 to January 2013.

• Understanding how fungicides improve spring barley yields, even when crops have low disease

Interim report for project available on the HGCA website at www.hgca.com/diseasecontrol

With spring barley yields often failing to reach their potential, it’s high time we asked how a fungicide improves yield even when there is little visible disease. This work should improve management guidelines and allow growers to save on input costs.

• Catch up with previous pieces from our Research in Focus series at www.fwi.co.uk/researchinfocus