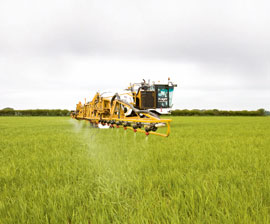 Fungicide programmes on Velcourt farms have been cut back because of the dry weather, but T3s are being applied, according to Keith Norman, the firm’s technical director.

“When we saw the writing on the wall, we changed our approach, so we were not spending a fortune on a crop with 10-20% lower yield potential,” he said at Cereals 2011.

In most cases that meant applying a triazole fungicide mixed with a strobilurin depending on rust pressure, he said. “But T3s are going on. Even though yields have been reduced, that is no reason to risk losing more yield by letting late infections in.

“We’ve made savings through the season, so they have accumulated, making it easier to spend on a T3.”

SDHI fungicides had been only trialled in places on most Velcourt managed farms, he added.

“Most of our farm managers are only trying some SDHI fungicide in places, because the data isn’t supportive of using it in the absence of disease. Where disease pressure is higher, I have no doubts of their ability, and in a wet spring with septoria problems we would have swapped in more.”

He was keen to see results from this year’s trials to see whether manufacturer claimed drought tolerance from the fungicides was translated into higher yields. “If there is anything in it, we will see it at harvest. But I haven’t seen any differences visually in the field.”