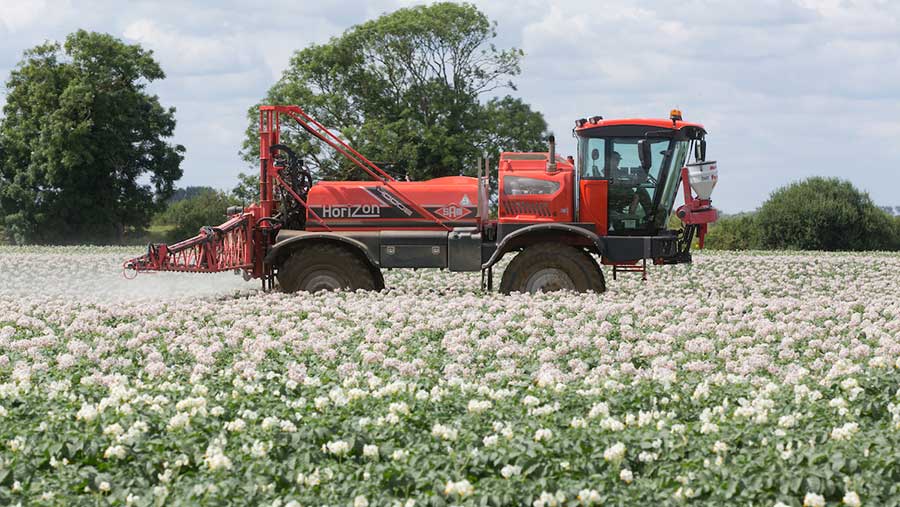 A reduced sensitivity to a key blight fungicide is being partly blamed for the spread of a new strain of the potato disease across Europe, with UK farmers urged to alternate their fungicide actives this season.

The Dark Green 37 (EU-37) strain of blight was first detected in the Netherlands in 2013 and it has now spread to England, German, Belgium and north-west France.

See also: How spud growers will benefit from blight forecasts

Worryingly, this strain of the most important potato disease is spreading at a time when other clones have failed to establish.

However, new results published this week by Wageningen University and Research point to resistance to a key blight fungicide being a possible factor in its rise, as well as its fitness.

“All EU-37 isolates displayed a reduced sensitivity to the fungicide active fluazinam,” said the university.

Researchers tested isolates from the Netherlands and Germany, which were obtained from fields with a clear reduced efficacy of fluazinam or from potato stores with unexpectedly high tuber blight infection levels.

Work is ongoing but in the meantime, the Dutch researchers advise growers to follow good resistance management.

This will not only prevent problems with a disappointing efficacy with the fungicide, also prevent the further rise of EU-37.

Ruairidh Bain, potato consultant at the James Hutton Institute agrees there is a need for good resistance management.

He advises against spraying fluazinam on its own and also recommends alternating it with other active ingredients with different modes of action.

However, when using it in a ready-formulated product mix, care is needed on what the co-form is.

“Some co-forms like cymoxanil are not ideal partners [for resistance management], as they do not persist in the plant long enough,” he said.

“So if you do want to use fluazinam, go for something like Hubble, as the co-form [dimethomorph] has greater persistence.”