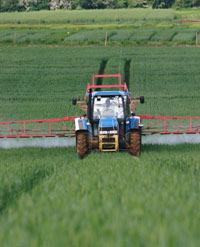 Co-formulating two triazole fungicides together isn’t a new concept. But both Ennobe and Brutus from BASF appear to be more than useful additions to the azole fungicide armoury for 2009, if the results of HGCA and other trials are to be believed.

HGCA trials suggest there is little to choose between the two for Septoria tritici control, although no doubt the different distributors will seek to emphasise each product’s relative merits in the coming season.

The critical features for both are the high azole loading each contains, and the new formulation (see panel). Those factors combine to increase efficacy and, importantly, yields over the market-leading azole fungicides, Opus and Proline.

One key difference between the two is that with Ennobe, Agrovista is stressing that use rates should be based on matching what rate of straight epoxiconazole would have been applied. “We’re never going to substitute grams of epoxiconazole with prochloraz,” says Craig Morgan, the firm’s technical director.

In contrast, Hutchinsons’ Dick Neale expects growers to use Brutus at rates applying less epoxiconazole than the equivalent Opus dose, because metconazole – a good triazole in its own right – helps pep up control. 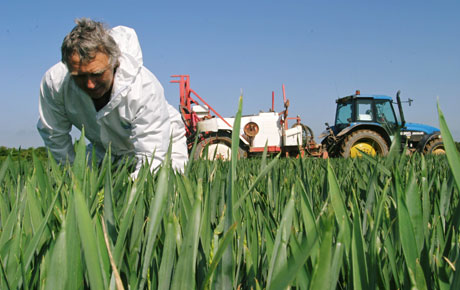 Growers will have increased flag leaf options this season, with the launch of two co-formulated fungicides

That is particularly the case in eradicant situations, he says. “Last year’s HGCA data suggest its eradicant activity is similar to Ennobe. But it was a largely protectant year and a relatively low-pressure one, at least in certain parts of the country.

“Our experience in the past three years is that it is far more powerful than any other product in an eradicant situation.”

The trials results were a surprise, he admits. “It was a surprise how well it stood out, particularly on green leaf area protection in the septoria year of 2006, and then in 2007 how robust it was against brown rust. I wasn’t expecting it to be that good.”

Mr Neale sees Brutus fitting at the flag leaf timing, with rates varying between 0.8 litres/ha and 1.5 litres/ha, depending on what T1 has been applied, variety and how much eradicant activity is required.

That has led the firm to consider replacing every bit of Opus with Ennobe, he says. “It offers better disease control and yield than Opus.”

In trials, based on a wheat price of £100/t, it offered a £46/ha advantage at T1 and £50/ha from a flag leaf spray over Opus, before the cost of the chemicals at equivalent epoxiconazole rates. Although pricing for Ennobe has not been finalised, it will not cost £46/ha more than Opus, Mr Morgan points out.

Both products should be tank mixed with chlorothalonil in most situations, he says. “The contribution [of CTL] is not as high as when you add it to Opus, but in our trials, it has added 0.2-0.3t/ha. The only time we won’t be adding it is when Atlantis is also in the mix.”

Tank mixes with Tracker are another possibility for both products. But Mr Morgan doesn’t see Ennobe as a stand-alone T1 eyespot product, even with its prochloraz content.

Instead, it or Brutus will be used to top up Tracker’s triazole dose, says Mr Neale. “Tracker contains only a relatively low dose of Opus, so you look to top that up. We’ve been doing it with Foil effectively, but Brutus is also good, and you can get away with a relatively low dose and still impart the benefit of its formulation.”