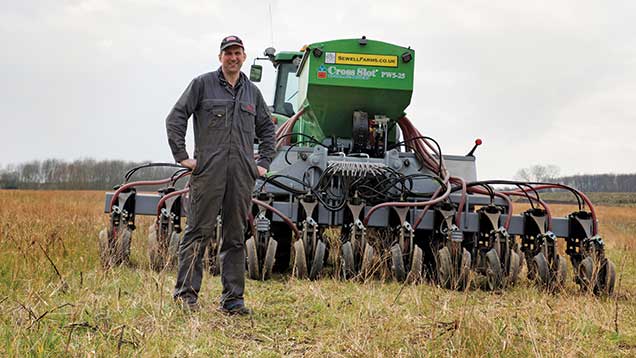 As a healthy, well-established milling wheat crop passes beneath his Bateman self-propelled sprayer, Kent grower Tom Sewell tells Farmers Weekly that adopting a no-till system is all about future-proofing his business.

It’s the middle of March and he is applying a post-emergence herbicide to tidy up grassweeds and the wheels are hardly making a mark on ground that was direct-drilled for the first time last autumn.

He’s encouraged by this indication of soil structure improvement – one of the key factors in future-proofing the business against increasing extremes in weather.

Mr Sewell explains that as tenant and contract farmers who own just 25ha of a 405ha farming operation south-west of Maidstone, he and his father also need to make the business as efficient and cost-effective as possible.

He identified the potential of no-till crop establishment as a means of achieving that, cutting out costly cultivations, saving on fuel, wearing parts and labour and allowing him to undertake all fieldwork himself.

A recent Nuffield scholarship took him to North America, South America, Australia and New Zealand to learn more about no-till and he struggled to find a reason not to take it up.

“During my scholarship I thought I would find a situation where it wouldn’t work, but I couldn’t.

“I’ve seen no-till systems working well all over the world, in different climates and on different soil types, regardless of the farmer’s educational background. If you have some common sense, you can make it happen,” he adds.

Growers are often interested in the concept of direct drilling, but struggle to let all of their redundant machinery go and Mr Sewell says this often has a psychological bearing on whether they make it work on their farm.

After considering the Claydon tine drill and the John Deere 750A disc drill, he decided the tine-based system moved too much soil and neither option was up to the desired build quality, so he opted for a Primewest Cross-slot.

Designed by machinery consultant Philip Wright of Wright Solutions, Mr Sewell commissioned a local fabricator to build the frame from the drawings.

Oxfordshire-based Cross-slot specialists Primewest Limited imported the openers from New Zealand – where the technology was developed at Massey University about 30 years ago.

Before the frame and openers were assembled and ready for work in spring 2014, the farm had already sold machinery worth £46,000, including one tractor and all their minimum tillage kit, and purchased a John Deere 8520 to pull the drill.

“Keeping your old kit gives you a get-out-of-jail-free card and it limits how far you are willing to jump.

“My advice would be to cash in, sell all your kit and get the best drill and tractor and GPS system. It will focus your mind on what you need to do to get things right,” says Mr Sewell.

He admits that he could have cut back further, but kept a John Deere 6920s, which has now been part exchanged for a 7530, and 7610 for grain carting, spray bowser duties and hay work.

“We are aiming to expand and they will allow us to take on more land without having to reinvest heavily. We can also get on with other jobs when we need to,” adds Mr Sewell.

The farm has also been able to let one full-time member of staff go, saving about £30,000 labour cost, with the farm only using one self-employed casual worker for five days last harvest.

Although cover crops have produced mixed results, Mr Sewell is pleased with the establishment of his Crusoe and Skyfall wheat and hybrid oilseed rape varieties Extrovert and Popular.

It will result in half the farm being sown with winter cereals, and the remainder an overwintered cover crop mix – with the mix dependent on following crop.

Spring crops – either wheat, beans or oats – will then be drilled direct into the cover crops, with the Cross-slot opener able to deal with huge levels of residue.

“This will help with soil conditioning, build organic matter, retain moisture and offer an opportunity to control blackgrass.

“You can go no-till without cover crops, but I see them as the big ladder in a game of snakes and ladders – they get you up the board straight away in terms of soil health and conditioning,” says Mr Sewell.

In addition to introducing more cover crops and spring crops, Mr Sewell will also be dropping oilseed rape from the rotation in autumn 2015, replacing it with hybrid winter barley.

He has become tired of fighting the constant battle with rabbits, pigeons and slugs and oilseed rape is known to diminish mycorrhizal fungi, important for nutrient cycling within the soil.

Blackgrass is also becoming more difficult and expensive to control in the crop, with Mr Sewell reporting only 50% control of blackgrass from his propyzamide (Kerb) this year.

“The neonicotinoid ban was the final nail in the coffin. It’s just not economic to grow rape at current prices when you are achieving 3.5-4t/ha in a one-in-four rotation,” he adds.

Mr Sewell doesn’t discount returning to oilseed rape in the future with a much longer one-in-seven rotation, but hopes the break will eliminate the need to roll for slug suppression – a pest encouraged by the crop.

With no rolling, he also believes the ultra low-disturbance system will come into its own for blackgrass control, resulting in little or no seed chitting in the crop.

“We have achieved yields in excess of 5t/ha in the past on virgin land, so coming back to it in a few years using cheaper conventional seed and less herbicide for blackgrass control would make it more viable,” explains Mr Sewell.

Sewell Farms use independent agronomist David Jones, who advises arable farms across Kent and Sussex. He believes the key to direct drilling success lies with the enthusiasm of the grower.

He initially had his reservations about Mr Sewell’s no-till system, but he was never dismissive of change and is now very optimistic the system will work.

“Ploughing is an easy option that gives you reliable results in most years, but with no-till you need to be prepared to think much more about what you are doing.

“Patience and attention to detail is required, which is why it might be difficult on big units or for large-scale contractors,” he adds.

Decisions on when to drill and cover crop choice and establishment all require careful consideration and getting out with a spade to ensure soil conditions are just right.

Mr Jones says you have to be prepared to experiment and there has been some trial and error on Mr Sewel’s farm since adopting the system.

This has included which cover crop mixes to use and when to use them and pre-emergence herbicide active choices and timings – something that did concern Mr Jones.

“I was worried, as many are with no-till, that residue on the surface could reduce herbicide activity, but I’ve learned that people shouldn’t be as worried as they are,” he says.

Results this season have been good from flufenacet-based programmes despite the dry autumn, which might be explained by the residue maintaining a moist and humid layer on the soil surface, helping the residual activity of the herbicides.

Mr Jones adds that it may also take a few seasons to find the most suitable cover crop mixes for all the soil types across the farm – essential for them to be cost-effective.

This season, some species in the mix have dominated after establishment in certain fields, so the balance of plant types need to be adjusted accordingly.

“They are expensive, so you need to know they are going to work to be cost-effective and provide the benefit you’re after,” says Mr Jones.

Asked about the potential of whether a no-till system may require fewer inputs such as herbicide in the future, Mr Jones urges caution, but doesn’t rule out the possibility.

“I’m confident blackgrass won’t get any worse and I’d hope in the long term we will be dealing with a shallower seed bank and the cover crops will help create conditions less favourable to the weed.

“But you still need to stick to the basics of later drilling, pre-drilling glyphosate and higher seed rates where needed to keep on top of things,” he says.

With all cropping and input decisions made for the good of the soil, Mr Sewell’s independent soil adviser George Hepburn plays a crucial role in the decision-making on the farm.

He says the majority of UK soil is not being farmed sustainably and sees the improvement on Mr Sewell’s farm as crucial to ensure it will be there for future generations.

“It is a system that Tom refers to as ‘regenerative agriculture’ and we are trying to improve the soil biology by increasing organic matter and earthworms, which improves rooting and soil structure,” adds Mr Hepburn.

“What Tom is doing is fantastic and is making a big difference to his soils and he also gets the bonus of having much more time to think about the business and time with his family.”

Regular “soil audits” include a standard N, P, K and Mg test, cations and anion test, trace elements and measures of soil biology such as organic matter and humus levels.

“We also test for what is actually available to the plant and take tissue samples through the season to ensure crops are getting exactly what they need, when they need it,” says Mr Hepburn.

The soil is fed with crop residue, cover crop residue, compost and humic acid, while crops get foliar feeds based on seaweed, sulphur and magnesium if the plants need them.

All nitrogen is applied in liquid form and the farm hasn’t used any phosphate or potash fertiliser out of a bag for 10 years or so, but Mr Hepburn says they haven’t neglected indices.

“We use sources such as compost, high-phos slag and biological products such as humic acid to help stimulate the release of nutrients locked up in the soil,” he adds.

Mr Hepburn says the healthy state of Mr Sewell’s soils has been a long-term vision that started with minimum tillage and the adoption of no-till has, and will, further improve his land.

“There are a huge amount of earthworms that are structuring the soil and repairing any damage that trafficking machinery cause already and that will only increase,” he adds.