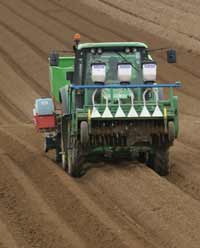 The new German government has endorsed the growing of genetically modified Amflora starch potatoes in its policy on the use of plant biotechonology.

A report on the website, www.gmo-safety.eu, says the new coalition government will promote a policy of responsible use of plant biotechnology in the country.

One of the key aspects of the agreement is the endorsement of cultivation of the starch potato, Amflora, produced by chemical giant BASF.

That had raised hopes the German government might act to encourage a decision to be made on the cultivation of the potato at a European level, Ralf-Michael Schmidt, head of government relations for BASF Plant Science, told Farmers Weekly.

“It is a very clear sign from our government and we hope that it will now act at the European level,” he said.

Previous German governments had usually abstained in voting on genetically modified crop cultivation, he noted. He hoped that policy would now change to a more pro position. “It could then have an influence [on decisions], but time will see whether that actually happens.”

The Amflora potato has been locked in an approval process for 13 years, despite the European Food Safety Authority several times arguing it was safe to grow. “It is now up to the commission to approve. After 13 years you would think they could come to a decision.”

The German government also wants to allow individual federal states to be able to set its own minimum separation distances between fields with GM crops and organic or conventional crops.

But it intends to wait until the outcome of an ongoing court case in Germany before deciding on whether the GM maize MON810 can continue to be grown in the country.