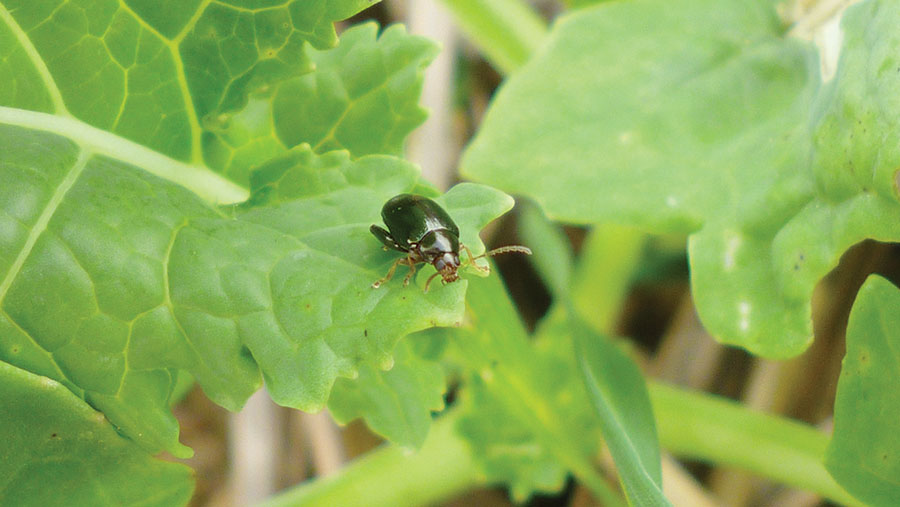 German oilseed rape growers are suffering more from cabbage stem flea beetle attacks than those in the UK with some 90% of crops in Germany infected.

The area of oilseed rape in Germany is twice that in the UK, and there was a huge presence of flea beetles just two weeks after sowing in the continental European country.

In a recent survey conducted by research group Kleffmann, 90% of rapeseed crops from the 1,144 German growers surveyed saw flea beetle damage, while only 57% of the crops from 401 UK growers saw infestations.

“UK growers can count themselves lucky, as in Germany 90% of rape growers had a problem with cabbage stem flea beetle,” said Roger Pratchett of Independent Business Research, the UK agent for Kleffmann.

In the UK rapeseed crop, estimated at 649,000ha, some 14% of the crop saw heavy pest infestations, 43% slight to moderate infestations while another 43% did not see any attacks.

In Germany’s 1.309m hectare crop, some 30% was seen to be severely infected, 60% had slight to moderate infestation and 10% was completely free of infection.

This season’s crop is the first to be affected by the European Union two-year ban on neonicotinoid insecticide seed treatments due to the chemical’s perceived harmful effect on bees.

In the absence of these seed treatments, insecticide applications of mainly pyrethroids to deal with the flea beetle infestations in the autumn doubled in the UK and quadrupled in Germany.

The survey conducted at the end of 2014 said that agronomists were seeing larvae in high numbers inside oilseed rape stems, and as well as the neonic ban this could also be a function of early drilling and a warm dry autumn.

An HGCA survey estimated that 2.7% of the oilseed rape crop in England and Scotland was lost to damage by flea beetles by the end of September.

It estimated that about 18,000ha of the crop was abandoned with only half being redrilled and most of the damage was done in Hampshire, Surrey, Bedfordshire and Hertfordshire.