Despite a host of disadvantages, farmers in Lower Saxony are saving 15% on production costs compared with their UK counterparts. They are managing to grow beet for £8.51/t compared with over £10 typically in the UK.

Although German farmers must contend with a lower beet price, higher variable costs and smaller field sizes, these disadvantages are more than offset by a ruthlessly efficient harvesting and delivery operation.

Grown by individual farmers, beet near Hildesheim in Lower Saxony is lifted, loaded and transported to the factory by three separate co-operatives, all owned by local growers who would be unable to achieve the necessary economies of scale by working alone.

“It’s the whole ethos of what farming in the former West Germany is all about,” says Martin Davies, an independent farm business consultant. “Farms are small, so they have been forced to collaborate. Now they are reaping the rewards.”

At Hoheneggelsen, for example, lifting is carried out by a six-row harvester owned by Zuckerruben Nettlingen GBR – a co-operative of 20 growers. Fields in the area average less than 5ha (12.5 acres), but the harvester managed by Christian Stoewenau still manages to lift about 720ha (1780 acres) in a 70-day season.

Mr Davies, who has conducted an in-depth study of German sugar beet production methods, believes the average grower in Lower Saxony pays £122/ha (£49/acre) to have his beet lifted, whereas UK growers fork out £160/ha (£65/acre).

Rather than carting it to a clamp, harvested German beet is left in piles at the side of the field.

A self-propelled elevator loads beet into trucks at a rate of 30t every 10-15 minutes. Early in the season, beet is lifted, loaded and delivered the same or next day. Even later in the season, it is always loaded within three days. Stockpiling at the end of season is minimal, saving time and money.

Importantly, loading is carried out 24 hours a day, Mr Davies says. “Factories won’t take beet at night here, but they do in Germany, so farmers are able to work round the clock and get the most from their loading machines.”

One of the farmers acts as a manager overseeing the loading operation. A combination of GPS and the internet is used to identify each batch of beet, direct hauliers to its precise location and provide each grower with a computerised delivery record.

“It’s amazingly co-ordinated,” says Mr Davies. “The schedule for each day is programmed into a website so each haulier can log on to the internet and see exactly where he has to be at exactly what time.”

This just-in-time approach to harvesting saves money for a number of reasons. The small field size means there is no requirement to run trailers alongside the harvester – not something that would be possible in the UK. Equally, there are no losses through respiration in the clamp, and damage due to handling is minimised. 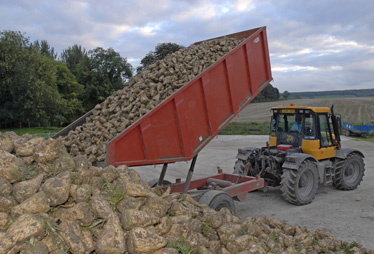 German beet is stored in the field, not in clamps as in th UK

“The classic UK scenario involves carting beet to a concrete pad, bulldozing it into a pile and then using a cleaner-loader to put it on to lorries. All the time it is being damaged and losing value through respiratory losses. In Germany, there’s none of this.”

At about 68t/ha, yields are similar to the UK. But the continental climate and frost risk from November onwards mean the German campaign lasts for a brisk 90 days, compared with the 150 days or more experienced by UK growers, with a larger tonnage going through the remaining factories.

“In East Anglia, the average grower harvests his beet in three orfour lifts, which means the harvester must come to the farm three or fourtimes,” says Mr Davies. “It’s hugely inefficient compared with Ger­many, where it’s done in one go.”

Unlike UK growers, farmers in Lower Saxony receive about 85p/t for loading their beet as a separate payment. Haulage costs in Germany are generally lower than in the UK because factories still accept delivery by tractor and trailer. Growers in this area receive £2/t for a 14-mile haul to the factory.

German beet is stored in the field, not in clamps as in the UK.