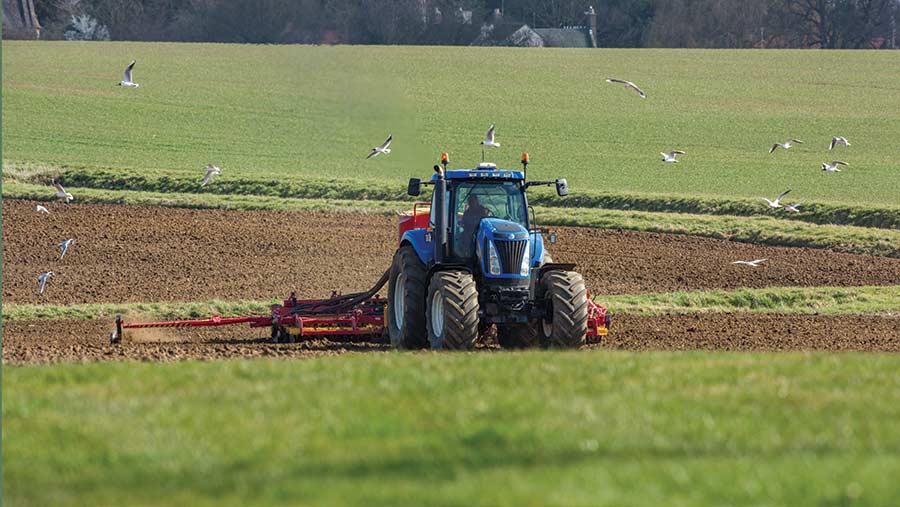 Growing spring beans for human consumption markets offers a tasty menu of enhanced blackgrass control, served with a £25/t premium and the chance of an extra 1t/ha yield on a subsequent wheat crop.

Long-time bean grower Andrew Askew, who farms about 10 miles south-west of King’s Lynn in Norfolk with his brother, Peter, and father, Roy, got into growing the spring crop 20 years ago after winter wheat establishment failed following a late sugar beet harvest.

This year Mr Askew has reduced the area of spring beans grown to 16.5ha, but a typical season will see about 26ha drilled.

In recent years he has favoured the Limagrain spring bean variety Fuego, which is preferred by the premium export market for human consumption.

“In 2013 we tried growing a crop of Fanfare but it grew too tall for my liking. We’ve done well with Fuego because it matures later and produces a bigger bean,” says Mr Askew.

When growing for human consumption, he adds, it is important to select a variety that there is a ready market for.

“You don’t want to be hanging on to large stocks for too long after harvest because they will go a darker colour and that could hurt your chances of hitting human consumption. That’s why we prioritise spring beans at harvest.”

Being so close to The Wash, the farm sits on a heavy, marine silty loam or “good, strong wheat-growing land” as Mr Askew describes it.

The farm’s average yield for spring beans is about 7t/ha, well above that of the national crop average which the Processors and Growers Research Organisation estimates at 4.5-5.0t/ha.

“We would be extremely disappointed if we yielded less than 5t/ha and will normally get about 7t/ha. That sort of yield, when prices were about £200/t, made it a very lucrative crop,” explains Mr Askew.

As with all spring crops, achieving a strong early establishment is vital to success and he adds that this is part of the secret to hitting the top yields.

“If you can get the crop in the ground and established early on you’ll get a better yield, so really you need to be prepared to drill from 5 February onwards.

“You must drill in good conditions and in some years that just means waiting until the land is dry enough. Whatever you do, don’t try to drill if it’s too wet.”

Drill depth is also worth thinking about, he says, as sowing too shallow will immediately leave the crop vulnerable to pigeon attack.

The farm has fields that are known to suffer from herbicide-resistant blackgrass and just last month Mr Askew received a letter from Adas confirming that the dreaded triple R resistance was now present in the weed population.

“Spring drilling makes a huge difference in being able to control this resistant blackgrass in the worst-affected fields. We glyphosate the fields prior to drilling to hit the blackgrass.”

Mr Askew’s agronomist, David Rushmer of Hutchinsons, warns that early drilling in the spring does tend to bring a bigger risk of weeds emerging in the crop, making a pre-emergence herbicide a crucial part of the control programme.

Typically Lingo (clomazone + linuron) is mixed with either Defy (prosulfocarb) or Stomp (pendimethalin) to form a solid pre-emergence spray.

“This tends to hold the weeds back and allows the bean crop to establish better. Growing spring beans helps in a bad blackgrass situation because you can use different herbicide actives than in a cereal crop,” says Mr Rushmer.

Spring beans are grown with the aim of hitting specifications for human consumption markets, which nets Mr Askew a healthy £25/t premium over feed prices.

He has been largely successful in meeting the standards for human consumption markets over the years, but the 2015 season saw the majority of the crop downgraded to feed, making it one of his worst years of growing the crop.

“We usually hit the specification and last year we had a good average yield, it was just a shame they weren’t accepted for human consumption, going for feed instead.

“They looked great, but they had little spots on the beans. There wasn’t much taken for human consumption within 40 miles of here because of this.”

He says the spotty appearance of the beans is largely down to getting the wrong amount of rain at the wrong time of year.

“The beans were fine to eat, it’s just the appearance that got them rejected by the processor. People eat with their eyes and spotty beans would put consumers off.”

Even if he were not consistently hitting the specification for human consumption, he says, it would still be worth growing spring beans for feed because the blackgrass control advantages make it a valuable crop to have in the rotation. He says he could cut back on his fungicide spend to maintain a profit margin.

Mr Rushmer says it is important to keep a close eye on the fungicide spend, which can start to erode margins – especially if disease creeps in nearer harvest and human consumption premiums need to be protected.

This happened last season with Mr Askew’s crop and he admits that he may have overspent on fungicides as a result.

“We got it slightly wrong last year in that we used too much fungicide near the end because we saw downy mildew coming in,” says Mr Askew.

“The spray kept the crop going longer than planned so it then needed to be sprayed off for harvest, adding another cost. We would normally let it die naturally.”

This pushed total input cost including seed to £440/ha, compared with a normal year when total costs are about £380/ha.

Pea and bean weevil and bruchid beetle, the two big spring bean pests, are getting tougher for Mr Askew to control as pyrethroid resistance builds.

As a result, Mr Rushmer says, the crop can require a fairly hefty insecticide programme to keep the bugs at bay.

“We do rely on good weather and as soon as we see the notching of the leaves it’s important to get a spray on. For better control it’s best to use a pyrethroid spray as soon as leaf notching appears and then again 7-10 days later.”

Pulse crops fix their own nitrogen and root nodules from six to eight weeks after drilling. As an added bonus, winter wheat drilled after a crop of spring beans tends to yield 1t/ha more than after other crops on the farm because of this nitrogen fixing.

“It means you can cut back on your nitrogen costs in the subsequent cereal crop,” notes Mr Rushmer, “but if you really want to push for the top yields of 10t/ha and upwards, having a bean crop in the year before can give you a bit extra to make all the difference.”