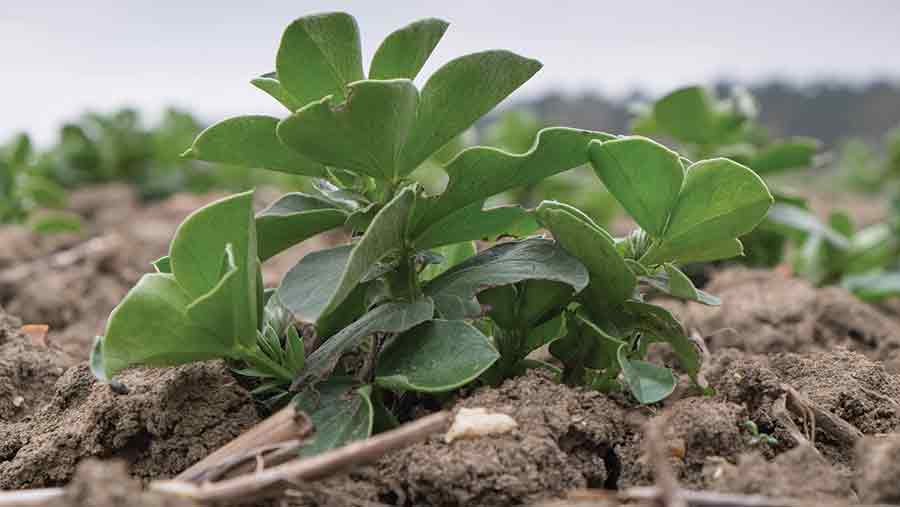 From the new “three-crop rule” and poor returns from oilseed rape to blackgrass management on heavy land, a host of factors are driving renewed interest in pulses and spring beans in particular.

With growing costs typically half second wheats and a fertiliser saving from residual nitrogen in following crops, the gross margin from spring beans can stack up well, strengthening the crop’s position in the rotation when commodity prices are under pressure.

Andy Bury of Frontier Agriculture predicts the 30% increase in winter and spring bean area in 2015 will be followed by a 5-10% rise next year. This could give a crop of 570,000t, assuming an average 4t/ha yield, split roughly two-thirds spring beans and one-third winter.

The extra supply has inevitably put pressure on prices, but strong domestic feed demand and from Middle Eastern human consumption export markets has maintained a reasonable premium over wheat, he notes.

At the time of writing, feed beans for November 2016 were trading around £15/t ex-farm over November feed wheat futures with premium quality pale hilum beans attracting an additional £20/t.

“Beans are increasingly replacing rapeseed meal in feed rations, providing strong core domestic demand,” he says. “This is supported by strong exports of human consumption quality beans to Egypt, which accounts for around 85% of exports, and countries such as Sudan, Palestine, Jordan, Israel and Libya.”

Underlying population growth of 1.5-2% a year in these areas, plus tougher economic conditions are ensuring that people are consuming more beans as an alternative to more expensive proteins, while less competition following successive poor French crops has helped UK exporters reinforce their position, Mr Bury adds.

“Britain is known for delivering the best quality European beans and is developing a recognisable brand which needs to be built on.”

But competition from exporters in the Baltic States, Australia and France has not gone away, so he urges anyone growing beans to maximise quality by tailoring agronomy to premium market requirements. Selling a proportion forward to lock into prices is also worthwhile, he says.

“Beans are a relatively low-cost crop to grow, but attention to detail is crucial from the first cultivation through to harvest, adds PGRO chief executive Roger Vickers. “Inputs must be applied at exactly the right time and beans must not be treated as a second-class crop.

“It’s not uncommon to find growers achieving yields of 7t/ha, but equally some struggle to get 3t/ha.

Spring beans are particularly susceptible to poor establishment given the dependency on early summer rainfall, so rapid, even establishment is essential.

Well-timed drilling at a uniform rate and depth into a good seed-bed is the best way of establishing beans and is more effective than broadcasting seed and ploughing-in, experts say.

Compaction and restricted root growth can reduce emergence by up to 40%, especially in dry conditions, so it is worth digging a test pit to identify any issues prior to drilling, he says.

While beans prefer early sowing to give crops time to develop before dry summer weather, soil conditions must be suitable. Forcing crops in when it is too wet or dry, or over-consolidating seed-beds has a detrimental effect, he says.

Good quality seed must also be used, as seed-borne stem nematode infests soil and causes problems for more than 10 years, he says. Growers should ensure bought-in seed is nematode free and test home-saved seed prior to sowing.

Chocolate spot, rust and downy mildew are the main diseases that need fungicide control and their development closely monitored.

Bruchid beetle is an ever-present threat and growers are advised to spray crops with pods present as soon as the temperature reaches 20C on two consecutive days, followed by a repeat application seven to 10 days later. A web-based advance warning service – BruchidCast – has been developed by PGRO and Syngenta.

Pulses are not nutrient hungry, but do require P and K, so soil indices should be kept at a minimum of 2, Mr Scrimshaw suggests.

Pea and bean weevil can be an issue at emergence and later growers also have to monitor crops for virus-transmitting black bean and pea aphids.

Around half of human consumption beans sent abroad are typically eaten whole, so good appearance is highly sought. Beans need to be a uniform colour and free from stains, cracks, chips and pest damage – bruchid beetle and pea and bean weevil being the main threats. Carefully targeted management during the growing season, harvest and storage can overcome many issues.

Spring beans are a favourite in the rotation at 800ha Burbage Farms, where 80ha of Vertigo will be grown for seed next year.

Mr Wells has “raised his expectations” of the crop, which yielded the target 7t/ha last year and a record 7.25t/ha in 2014. This is alongside meeting premium quality requirements for seed crops – the farm recently won the 2015 BEPA human consumption sample award.

“We’ve tried to cut out the variability, a lot of which comes down to how well the crop is established. Beans have to grow away quickly, so we have to be patient – a bit like waiting for the right time to sow sugar beet.”

Beans are usually drilled 7.5-10cm deep with a Vaderstad Rapid around mid-March, but only if conditions are suitable. Heavy land is usually ploughed in autumn with lighter soils left as HLS overwintered stubbles and ploughed in spring before drilling. Secondary cultivations with the power harrow are kept to a minimum. A Sumo Trio sometimes replaces the plough where conditions allow.

Pre-emergence herbicide Stomp (pendimethalin) is usually followed by a split post-emergence strategy where the total allowable dose of Basagran (bentazone) is divided into three even applications timed to hit repeat flushes of small volunteer oilseed rape, cleavers and other broad-leaf weeds.

“It can be a nuisance going on with the sprayer three times especially when conditions go against you, but it seems to work. Sometimes the final third isn’t needed, but is good to have as a fall-back.”

Bruchid beetle is a challenge every season and Mr Wells is trying a novel approach to improve control by spraying at night.

“Beetles appear to emerge and sit at the top of plants when it’s dark, so spraying in darkness seems to achieve better control. It’s not scientifically proven, but we tried it this year and although there was some low-level damage crops were generally very clean.”

Beans have earned their place in the rotation at Brixworth Farming Company and account for almost a quarter of the 2,000ha farmed.

Some 220ha of Vertigo spring beans and 175ha of winter varieties Tundra and Wizard will be grown for human consumption next harvest, alongside wheat, barley and oilseed rape.

Indeed, a “zero-N” PGRO project on the farm suggests beans can leave up to 50-60kg/ha of residual N for the following wheat crop, says Charles’ son Ian, who is responsible for agronomy across the farm.

“That level of nitrogen is not something we’d necessarily see every time, but it has allowed a significant fertiliser saving on the wheat this year and we’ll continue to monitor it.”

A typical premium of £20/t ex-farm over feed beans and average yields of 5.78t/ha and 5.21t/ha for spring and winter varieties respectively in harvest 2014 and provisional 2015 yields of 4.5t/ha, also means the crop stacks up financially in its own right, Charles continues.

However, he acknowledges growing beans is far from straightforward, resulting in a need to remain flexible.

A wet summer and delayed ripening meant the 2015 harvest did not finish until 2 October resulting in some staining on samples. Further autumn rain hampered winter sowing on the heavy, Denchworth and Hanslope series clays, but rather than forcing establishment in poor conditions, winter seed will be saved for next year and extra spring seed sown instead, he says.

“Good establishment is key to success. We wait until seed-beds have warmed up and crops can grow away quickly rather than putting beans into soil that is too cold where seed just sits around.”