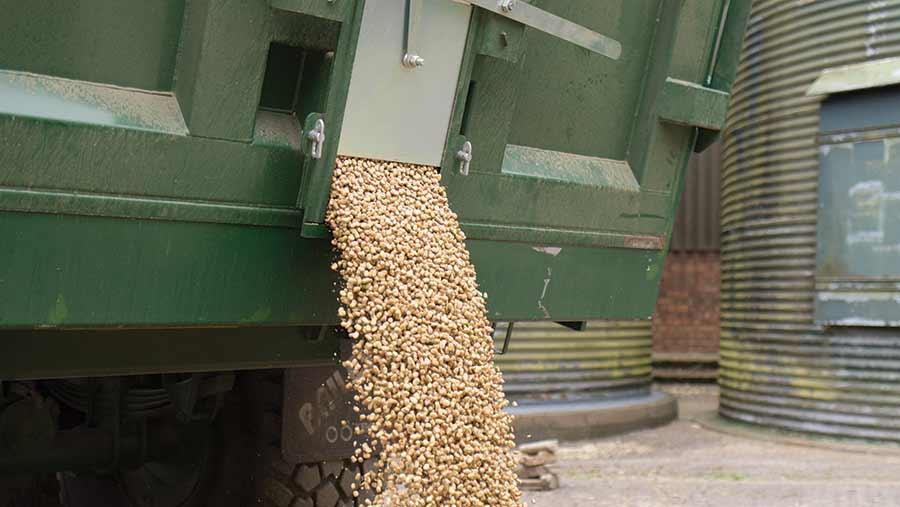 Both merchants and growers are benefiting from a new free online grain trading site, developed in the South Downs by a grower and computer developer.

Growers are saving time in getting bids, as well as securing an extra £3-5/t, while merchants are able to source from a wider base, reaching those who have never traded with them before.

Graindex is a spin-off from the successful Sell My Livestock auction site, which had more than £5m of sales last year.

Following its success, Mr McInnes teamed up with a local arable grower to see if the same could be done in the grain world.

Farmer Andrew Huxham and Mr McInnes spent 12 months developing the site with input from local farmers and merchants. The site was launched last September and already has more than 50 merchants and 500 growers using it.

Buyers range from the big players such as Nidera, Glencore, Gleadell and Openfield through to small one-man merchants across the UK.

“Farmers like me are already buying and selling things such as holidays online, so why not grain? Arable growers are more web-savvy, using variable-rate inputs and mapping yields in fields. The next logical step is selling grain,” he says.

When selling grain, it can take time ringing around to get bids from three to four merchants, he explains. “It can easily take half a day to get prices.

“There is already a lot of high-quality information with many market reports and email alerts available. But farmers are very busy and at the end of the day, they want to know which merchant is offering the best price on the day.”

So the aim of Graindex is to help farmers get the pricing information they need and then get the best price for their grain, he says.

The end result is an easy-to-use website, with only five minutes required to create a listing, he says. “You can go away to do another task and then come back after the trading period to review the bids.

“On average, sellers are seeing four to five bids a listing and can see a see £4-5/t range in price, which adds up when selling, for example,  1,000t,” he says.

Growers create a listing in the marketplace outlining what they wish to sell.

There are two trading periods in a day, one in the morning from 10am to 12pm and one in the afternoon from 2-4pm. In that period, merchants can bid for that listing.

The process is transparent, as merchants can see who the farmer is and they have two hours to price it and they can amend it in that period according to any changes in world prices.

After that, there is a 20-minute decision period when the seller can view the bids – which can’t be amended – including specs, terms and conditions. Once happy, the farmer clicks to accept, forming a contract. The merchant then sends the contract as if the deal had been done over the phone, he explains.

If the grower doesn’t accept in that 20-minute period, the offer will be declined. Mr Huxham adds there is no obligation to sell if the bids fail to meet the farmer’s target price.

Growers then have to click one of four boxes explaining why they have not accepted the offer. This is fed back to the merchant. The options are: an existing business relationship with the merchant, contractual specification, payment terms or haulage.

“Merchants have found this to be really useful, as they can see why they just missed out on the deal. For example, is the local market paying more? They don’t hear back from unsuccessful bids by telephone, so it can help them get the deal next time.”

In addition, it helps widen the search when they are looking to fill a boat for export. “We saw this recently with beans going for export,” says Mr Huxham.

“Merchants can also set up alerts setting criteria, such as crop types and geographical area, to help find new customers.”

Mr Huxham, who is responsible for selling grain on the family farm in Up Marden, West Sussex, is selling to firms he never previously did business with to.

The family farm 900ha of combinable cropping across several sites, from Bognor Regis on the coast to the South Downs and into Wiltshire, producing milling wheat, spring barley, oilseed rape, peas and beans.

“I had never dealt with Nidera or ADM before using the site and have sold to both.”

There are two types of contract, the first is a fixed-price deal where the quality is known, such as old-crop. There is a notes section where sellers can add additional information such as quality and specs if it has already been tested.

At present some 500 farmers have signed up and the site has seen a surge in membership since Christmas, which Mr Huxham believes is  due to the flat prices, with growers looking to get that extra £2-3/t.

Farmer members also have access to data in their dashboard showing recent purchase prices in their county.

“Most farmers get futures information, but prices can vary regionally, so this information from Graindex helps them get a better handle of local prices.”

The Graindex site is free to farmers and merchants and the company is planning to launch a mobile app.

His marketing strategy consists of all rapeseed going into a harvest pool, while roughly one-third of the cereals are sold 12 months forward if the price is right, one-third in spring and the rest at harvest.

Usually, he rings around merchants, but found this to be quite time-consuming. This is one reason why he tried the Graindex site.

“You put your listing on at 10am and look two hours later to review the bids. It is an easy-to-use tool for selling grain and getting up-to-date prices.”

One week, he saw a £3-4/t difference between the best and worst bids, “which is quite substantial”.

“When ringing round in the past, the difference was nearer £1-2/t. Also we are getting bids from people we have not sold to before.”

In conclusion, Mr Edney sees it as another valuable tool to help with his grain selling.