Precision farming technology has boomed over the last 10 years with GPS guidance and yield mapping systems now commonplace on UK farms. But what will be the next step?

In the short term, some reckoned products and services from competing manufacturers would become fully integrated and others saw greater levels of tractor and implement automation. But some of the longer-term predictions painted a very different picture for tomorrow’s agriculture.

Precision Decision’s Clive Blacker thought integrating products from different manufacturers would be essential. “We need to get to a point where machines are inter-compatible,” he said.

Many companies were aspiring to achieve the ISO 11783 standard, with systems such as the Isobus console allowing implements from multiple manufacturers to be managed from one control unit, he said. “But this is still in its infancy when it comes to precision farming.”

Part of the problem was that new developments were far more advanced than the current standards system, he added. “It is being pulled along by the industry rather than pushing the industry forward.”

Improving communication between machines and systems would be another development area, he said. “Wireless communications will become common and vehicles will be online 24/7, allowing real-time data transfer and processing.” This would allow large amounts of information to be transferred between office-based computers and machines, he added.

Auto-headland turns where the tractor had the ability to take the implement out of work, perform a headland turn and put the machine back to work, were already possible, he said. “This has been achieved by tying in existing headland management features with automatic guidance systems.”

Two options would be available to remedy this, he said. A system called Open Loop had been used on some equipment, which used predefined dimensions of the implement and its attachments to keep it in line with the tractor. Although not yet proven, the system could prove cost-effective, he said.

Active implement guidance would be the next step, allowing the implement to steer itself independently of the tractor. Steering wheels or disc coulters would be used to do this, he said. “Typically this would be controlled using an RTK system mounted on the implement itself.”

Developments further down the line could see leader/follower systems where one or more vehicles track each other or buddy vehicles controlled by one operator in central machine, he concluded.

Talk of cutting edge precision farming technology was plentiful at this year’s HGCA R&D conference, but visitors were warned that seeking ultimate precision could be false economy.

But the extent of these improvements could vary substantially from farm to farm. “Growers shouldn’t seek a spurious level of precision,” he warned. “Farms with significant variation in soil type could benefit from precision-farming technology, but where there are only one or two soil types, variation of in-field applications could be wasted.” 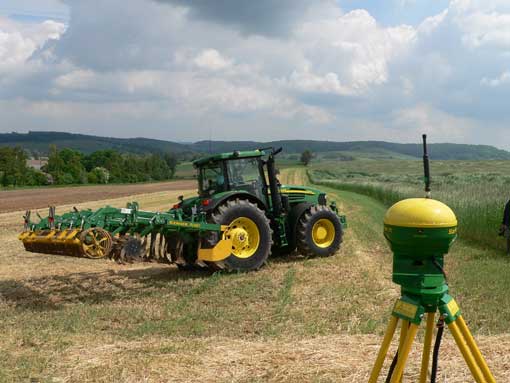 Based on current estimates, three-quarters of the country didn’t have enough variation to warrant variable-rate applications, he added. “You need to justify the need for technology before making any decisions.”

On farms where variable-rate technology could be justified, growers had several inexpensive options to explore before conducting expensive soil sampling and coring, said Dr Dampney. “You can use soil survey maps, aerial photographs and satellite images to start identifying soil zones.” Old field maps could help identify divisions between soil types, he added.

TAG’s Stuart Knight agreed. He reckoned farm size, cropping and the level of on-farm variation determined the complexity of system needed. But services to measure variation had progressed much more slowly than the systems for managing it which made the process more difficult, he noted.

Benefits of variable nitrogen application were debatable and could be smaller than reported commercially, he added. “This is partly because not all fields will have sufficient variation to justify altering nitrogen input.”

Spraying systems with the ability to target individual plants or leaves are already under development, said Mark Norremark from Aarhus University, Denmark. “As the price of pesticides increases we had to look at ways of making up for this,” he said.

Dropping glyphosate on individual plants could offer a 98-99% reduction in the amount of product used, he noted.

Prototype systems were small-scale, but full-size versions could be seen in the future.

“As a result of politics we are being deprived of the most precise form of plant breeding technology – genetically-modified crops.”

GM crops had the ability to reduce inputs, be better for the environment, offer higher profits and in turn drive investment into even better plants, he said. “If you want a more precise form of farming, you need to start with the plant.”

In the USA, Canada and Australia, GM crops with precision technology on tractors had increased productivity, weed control and conservation of moisture and soil, he said.

The Be PRECISE initiative is a series of activities providing information about precision farming technology for growers and agronomists. The advanced Level 2 workshops take place at various locations throughout November and December.