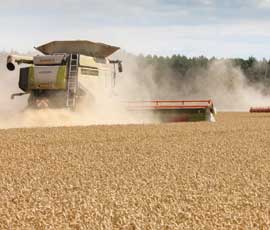 Glyphosate is proving to be an essential harvest tool for our Scottish and north-western Barometers. Luke Casswell reports

It’s been a promising start to Andrew Stirrat’s harvest in Perthshire, with his winter barley crop averaging about 8t/ha.

“We were a little disappointed with the six-row, but the fields weren’t drilled in ideal conditions and growing conditions weren’t great. Bearing that in mind they’ve not done too bad and there is a big crop of straw as well,” he says.

Mr Stirrat started oilseed rape on Monday (August 19), which he hopes to complete this week before moving into 90ha of winter wheat.

Growing the varieties, Horatio, Gravitas and Invicta, Mr Stirrat has once again sprayed off his fields using Round-up Max (glyphosate).

“We usually spray off all our fields, but this year it will be especially important with the uneven ripening.

“It speeds up the combining and drying process and from the trials we’ve done – no other product comes close,” he explains.

Mr Stirrat reports some local growers solved the greener patches in the tramlines simply by driving down them with 18 inch tyres.

Coupled with the wheat, some contracting harvesting will also be done before moving back to his own spring barley.

The spring crop looks promising from the early samples taken on Fingask Farm, with it ripening much quicker than expected, according to Mr Stirrat.

No sooner has this year’s crop been harvested, Mr Stirrat is preparing for next year with all of the autumn oilseed rape sown following winter barley.

“We baled all the straw which goes to a local farmer for carrots and we then sub-soiled and pressed the land.

“The soil is looking in fairly good shape considering what we went through last year. The heavy clay land has cracked very deep down and we’ve also sub soiled to a depth of about 18 inches.”

Winter barley measures up in Shropshire

Oilseed rape has been the standout performer on Rob Timmis’s farm in Shropshire, with yields averaging 4.7t/ha.

Across large areas of the country, oilseed rape has been hugely variable, but Mr Timmis says he is delighted with how his crop has performed.

This is the first year the oilseed rape harvest and drilling the next season’s crop have clashed, but fortunately for Mr Timmis, the delayed season doesn’t seem to have effected yields too badly.

“Normally we aim to get around the 5t/ha mark, but there are a few bare areas and the wet weather has probably brought the average down slightly. However, we have still got the better land to come.”

The varieties – Cubic, Troy, Quartz and Vision – have all performed well and Mr Timmis hopes to complete the OSR harvest this week. Despite the good oilseed rape yield, Mr Timmis admits it has so far been a frustrating harvest.

“When we experienced all the hot weather we didn’t have a lot ready and now everything is ready to go, the weather has become a bit patchy. Hopefully, 10 days of good weather and we should be nearly there.”

Winter barley was completed in July, with yields at 8.1t/ha whilst winter oats have also been harvested yielding 6.4t/ha.

“All of our barley is on marginal land where we can’t grow second wheat so we never get huge yields, but I’m happy with what we got.”

The variable maturity of crops has forced Mr Timmis to spray off the majority of his area with Round-up (glyphosate).

“We don’t usually do much pre- harvest Round-up. It won’t make a huge difference to the bottom-line and, hopefully, it will save a bit on drying costs.”

Despite having a few small ventures into the wheat harvest, Mr Timmis hopes to get properly going this week, with 480ha of Humber, Grafton, JB Diego and Oakley to cut.