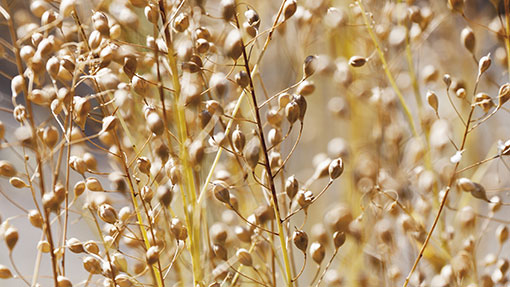 Rothamsted Research has been given approval for a field trial of GM plants that produce omega-3 oils.

The GM camelina has been modified to produce omega-3 polyunsaturated fatty acids in its seed oils.

The trial, which is due to start this spring and run until 2017 on the Rothamsted estate in Hertfordshire, will test the performance and yield of the GM camelina under field conditions.

They have demonstrated that these plants produce the right profile of these fatty acids in significant amounts when grown in greenhouses and will now evaluate the performance of this trait in the field.

Omega-3s are polyunsaturated fats found naturally in oily fish, nuts, seeds and leafy green vegetables. They are associated with many health benefits including prevention of heart disease and stroke.

Professor Johnathan Napier, lead scientist of the project, said: “We are very pleased to welcome the decision of DEFRA to grant us permission to carry out our proposed field trial.

“We have made considerable progress over the past 10 years in designing and developing these plants and my colleagues and I am very happy that we can now test the performance of these plants in the field, under real life conditions.”

The controlled experiment will begin mid-May this year with the sowing of GM camelina seeds.

“We have made considerable progress over the past 10 years in designing and developing these plants and my colleagues and I am very happy that we can now test the performance of these plants in the field, under real life conditions.”
Professor Jonathan Napier

The plants will be harvested by August-September 2014, and a small amount of seed will be used to analyse the oil content, with all the rest of the seed and plant material destroyed according to the consent conditions.

“Being able to carry out the field trial with our GM plants, means that we have reached a significant milestone in the delivery of our research programme,” said Prof Napier.

The GM inspectorate of the government’s Food and Environment Research Agency (FERA) will be carrying out regular inspections.

Professor Martin Parry, acting director of Rothamsted Research, said: “We are delighted to be in position to carry out the field trial and to further assess the potential of these GM plants to contribute, as one of many solutions, to the important environmental sustainability issue of providing omega-3 fish oils”.

Professor Jackie Hunter, BBSRC chief executive, added: “This research is seeking to provide an alternative source of omega-3 oil for the aquaculture industry, which is seeking new ways to maintain and increase its sustainability.

“After many years of BBSRC supported laboratory research this project has reached the point where only a field trial will show scientists if this could work in real world conditions.

“I am pleased that the team are now in a position to proceed and will be interested in hearing their results.”

This regulatory decision to give the trial the green light follows a public consultation and the independent expert scientific advice from the Advisory Committee on Releases to the Environment.

Conditions have been imposed on the trial to ensure it is conducted safely, and the GM plants will not be allowed to enter the food or feed chain.

However, anti-GM campaigners have criticised the trial and branded it a waste of taxpayers’ money.


Emma Hockridge, Soil Association head of policy, said: “This is a waste of scarce public funds by Rothamsted Research – it is choosing to carry out trials of GM camelina when two non-GM Omega 3 producing crops are already available to UK farmers.


“Government scientists in the US have recently confirmed that GM crops do not yield any more than non-GM crops, and sometimes even less.”


She added: “GM crops are making farming less fair, more risky and no more sustainable. Instead, we support practical science and innovation that addresses real needs, is genuinely sustainable and puts farmers in control of their livelihoods.”


Liz O’Neill, director of GM Freeze, added: “Given that two crops conventionally bred to produce omega-3 fatty acids are already available in the national seed catalogue, how exactly will all the time, brain power and public money expended on GM camelina actually help farmers to make a living or feed the nation?”