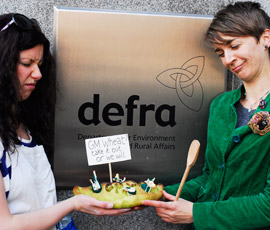 Protestors have ramped up their campaign against genetically modified wheat trials, by delivering a ‘giant’ pasty to the DEFRA offices.

Members of the group, called “Take the Flour Back”, carried the pasty, which they claimed was 4ft-long but appeared to be no bigger than 8 inches long and dumped it at the front door of the offices on Wednesday (13 April).

DEFRA workers had to step over a carpet of toast laid out on the steps to enter the offices as protestors lobbied officials. The toast carried the message “GM wheat? Pull it out or we will”.

Activists are urging ministers to stop the field trial of GM wheat at Rothamsted Research, which contains a peppermint gene that wards off aphids.

For the trial, Cadenza wheat has been modified to produce a non-toxic odour – (E) beta-farnesene (EBF), a naturally occurring chemical found in peppermint plants, which is releases to act as an alarm signal to keep aphids away and attract their native predators, parasitic wasps (Braconidae).

But the group claims the trial, which was planted on 23 March, is testing a “brand new synthetically constructed ‘fake’ gene that is most similar to one found in a cow”.

A spokesman for the Take the Flour Back group said: “We delivered the huge cow pie to the DEFRA offices and we are asking ministers to stop the GM wheat trials that are taking place at Rothamsted Research.

“The pie has been filled and it has cute farm toys sticking out of it as a symbol of the brand-new synthetically-constructed ‘fake’ cow gene that Rothamsted is testing.

“We feel that DEFRA cannot allow this trial to go on. It’s dangerous and they must act to stop it now.”

The group said the trial presented a clear risk to UK farming, saying there is a risk that it will contaminate neighbouring fields and destroy years of agricultural research at Rothamsted.

“There’s a belief that there will be cross-contamination because wheat is self and wind pollinating,” added the spokesman.

If the government does not act quickly to pull up the GM wheat, the group is threatening to “publicly remove the plot”.

Jo Walker, from the Community Food Growers Network, is supporting the campaign.

She said: “There is no market for GM wheat anywhere in the world, so any accidental escapes from this trial will have devastating consequences.

“We know from experiences in North America that experiments can and do leak into the food chain, and cost farmers millions in lost exports.

“This GM wheat contains parts of a virus, traits for antibiotic-resistance, and man-made genes ‘most similar to that of a cow’, it’s hardly surprising no one would want to eat it.”

Ruth Barnes, a pensioner from Hertfordshire where the trial is taking place, added: “Voters have rejected GM in debates and on supermarket shelves, and yet the head of DEFRA, Caroline Spelman, is a former GM lobbyist who approved this GM trial despite expert scientific advice to the contrary.

“We’re not holding out much hope that she’ll start listening to the public. So we’re inviting people to join us to ‘Take the Flour Back’.”

The Take the Flour Back Group is also planning a day of action with a public picnic and “mass decontamination” on Sunday 27 May, at the headquarters of Rothamsted Research in Harpenden, Hertfordshire.

It will also bring UK campaigners together with the many people resisting GM in other parts of the world, with voices from Latin America, Asia and Africa opposing the technology and this trial.

Maurice Moloney, director of Rothamsted Research, said: “We would be pleased to provide a platform where representatives from their group and Rothamsted could present their perspectives on this issue.

“Our scientists will also be on hand to listen to the protestors’ concerns and to discuss the trial. We will also make ourselves available to speak to this group before the public day of action, if they wish.”

Wheat is Britain’s main domestic staple and one of our largest agricultural exports, worth over £1.5bn. Scotland had the world’s highest wheat yields in 2011.