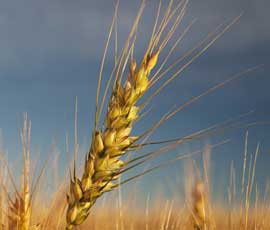 Scientists say they will consider replanting a GM wheat trial if it is destroyed by activists.

They have organised a “mass action” against the experiment on Sunday (27 May).

But Rothamsted scientists said they hoped to continue the trial, which aims to see whether GM wheat can repel aphids.

Genetic modification was by no means a magic bullet to solve global hunger, said Dr Bruce. But he hoped the research could make a contribution towards feeding the world.

Dr Bruce also addressed accusations that any beneficial GM technology developed as a result of the Rothamsted trial would be patented.

There were “no plans to patent this trait,” he said. “It would be open source.”

Read the live web Q&A on the GM wheat trial